India   Politics  21 Sep 2019  Don't worry about NRC, BJP has to get past me to touch you: Mamata Banerjee
India, Politics

Don't worry about NRC, BJP has to get past me to touch you: Mamata Banerjee

The Trinamool Congress supremo stressed that the NRC was meant for Assam. 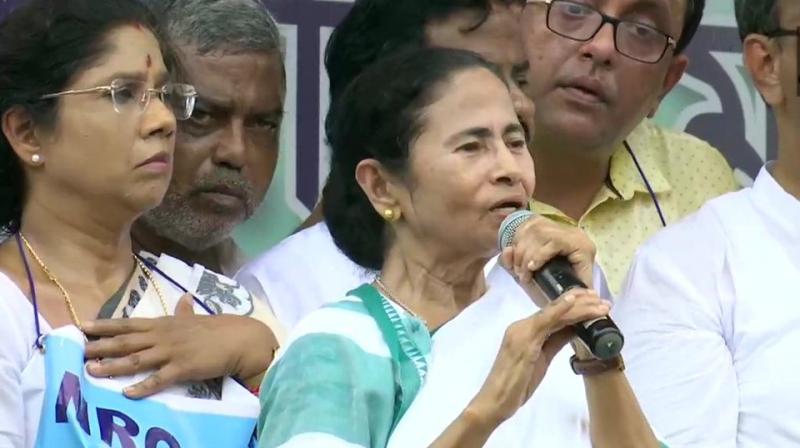 Urging the people to make sure that their names are in the voters' list, Banerjee accused 'local leaders' of the BJP of spreading canards about the possibility of implementing the National Register of Citizens in the state. (Photo: File)

New Delhi: West Bengal Chief Minister Mamata Banerjee on Friday assured the people that NRC will not be allowed in the state and the BJP would have to get past her if the saffron party wants to touch them.

Urging the people to make sure that their names are in the voters' list, Banerjee accused "local leaders" of the BJP of spreading canards about the possibility of implementing the National Register of Citizens in the state.

"I assure the people of West Bengal that do not worry if you have faith in me. Nobody will have to leave West Bengal. You will continue to stay here as you have been all these years. If they (BJP) want to touch you, they would have to get past Mamata Banerjee first," she told reporters after reaching the city from New Delhi this evening.

The Trinamool Congress supremo stressed that the NRC was meant for Assam and she went to New Delhi to inform the home ministry about the ordeal of the people of that state.

The final NRC, a list of Assam's residents and published on August 31, excluded the names of 19 lakh people.

"I doubt whether it will at all be implemented anywhere else in the country. Like us, Bihar has already said they will not implement it," she said.

Asserting that she was, is and will be there to care for the people, the chief minister said she will not allow implementation of the NRC in the state.

"Those who are saying NRC will be implemented in West Bengal are only trying to scare the people. Some local BJP leaders are spreading such canards, television channels are continuously telecasting this and the people are getting hurt (because of this)," Banerjee said. This is a political weapon of the BJP, she claimed.

Banerjee said the ongoing drive to digitise ration cards has nothing to do with the NRC but a move to get some corrections done.

The chief minister also announced compensation of Rs 2 lakhs to the families of two persons who died in separate incidents recently in connection with the digitisation of ration cards and apprehension of getting excluded in the event of implementation of the NRC in the state.

"I have heard that one person committed suicide in Jalpaiguri and another died while waiting in a queue for digital ration cards in Balurghat. We will pay a compensation of Rs 2 lakhs to the two families because they died while worrying about the NRC," she said.

During her visit to New Delhi, Banerjee had met Union Home Minister Amit Shah on Thursday and raised the issue of the NRC in Assam.

She had also met Prime Minister Narendra Modi on Wednesday and raised the issue of renaming the state.