Last year, in October the protesting farmers were stopped at the Delhi-Uttar Pradesh border by the Delhi Police. 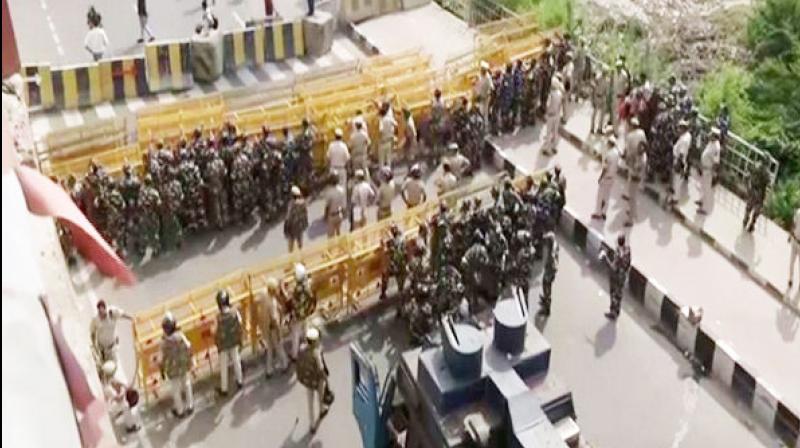 Security has been beefed up with barricades put across the roads to stop protesting farmers from reaching national capital from the adjoining Uttar Pradesh on Saturday at East Delhi's Ghazipur border. (Photo: File)

New Delhi: Security has been beefed up with barricades put across the roads to stop protesting farmers from reaching national capital from the adjoining Uttar Pradesh on Saturday at East Delhi's Ghazipur border.

Farmers mainly from across the Western Uttar Pradesh gathered at the Ghazipur border as they planned to hold the march upto Kisan Ghat, the memorial of Chaudhary Charan Singh, a renowned farmer leader, located in heart of national capital.

The farmers are holding march pushing forth their demands of payment of sugarcane crop dues, full loan waiver and making electricity used in farming free among others.

Personnel of Delhi Police and paramilitary manned the gateway to Delhi at Ghazipur putting up barricades and equipped with riot gears. Water cannon were also deployed to stop the marching farmers. While on the other side of the border heavy deployment of Uttar Pradesh police along with PAC and RAF is being seen.

"Why are farmers (Kisan) are not allowed to go upto Kisan Ghat? Is section 144 imposed? They are destroying the farmers," said a farmer.

Joint CP, East Range-Delhi at Delhi-UP border near Ghazipur, said "We are coordinating with UP police. Approximately 500 farmers are on their way here."

Uttar Pradesh's farmers were embarked on a march to Kishan Ghat in Delhi on Saturday after talks between Bhartiya Kisan Sanghatan and the Agriculture Ministry failed in Noida. The march began on September 11, against the rise of electricity tariff among others.

Last year, in October the protesting farmers were stopped at the Delhi-Uttar Pradesh border by the Delhi Police. The police also used water cannons and tear gas to disperse them. Thousands of farmers agitating farmers under the aegis of Bharatiya Kisan Union (BKU) protested to demand loan waiver, reduction in electricity tariff and pension for farmers aged above 60.

The yatra began on September 23 last year from Haridwar with a score of farmers from Gonda, Basti and Gorakhpur participating in the protest march. The police also used water cannon, tear gas shells to halt their march.