India   Politics  21 Sep 2019  ‘Won’t do any harm’: Babul Supriyo to ailing mother of student who manhandled him
India, Politics

‘Won’t do any harm’: Babul Supriyo to ailing mother of student who manhandled him

He said that he had not filed an FIR against anyone and asserted that he would not let anyone do that either. 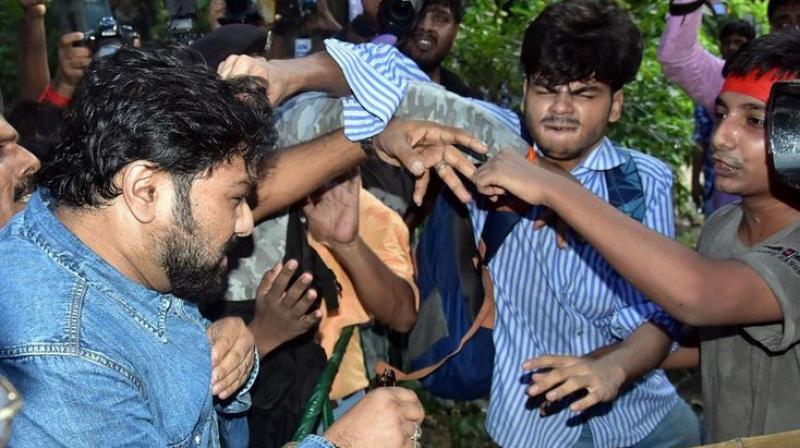 Babul Supriyo on Thursday was caught on camera being manhandled by the protesting students. There were visuals of a particular student pulling him by his hair. (Photo: ANI)

Kolkata: BJP’s Union Minister from West Bengal Babul Supriyo, who was recently heckled by students at Jadavpur University in Kolkata assured that he will take no actions against the student from the protest so as to not distress the mother of that student who is suffering from cancer, reported News18.

However, in a tweet on Saturday, the Union Minister of State for Environment seemed to be addressing the mother of the student in question and said, “Don’t worry, I won’t do any harm to your son.”

He further said that he wanted the student to learn from his mistake. He had not filed an FIR against anyone and asserted that he would not let anyone do that either. “Don’t worry. Recover soon, Aunt!” he said further, sending the woman his greetings.

Many followers supported the minister’s decision to not file charges in the comments to his tweet. One said, "Salute you sir. You have won millions of hearts", while another commended his humanity and honesty saying, "Thanks you @SuPriyoBabul Sri best humanity & honest person." Several others also showered him with love and support.

On Friday, Supriyo had tweeted that he would not treat the protesting students in the manner that they had treated him, and even instead suggested rehabilitating them.

Left-affiliated students present at the protest told News18 that the demonstration had agitated Supriyo who allegedly made sexist remarks in Bengali against female students who had gathered there.

West Bengal Governor Jagdeep Dhankhar, who reached the varsity to meet the higher authorities and to rescue Supriyo, also faced resistance from students who refused to allow the minister to leave the campus.