Mulayam’s cousin Ram Gopal Yadav, who had taken Akhilesh’s side in the family war, did not attend the event. 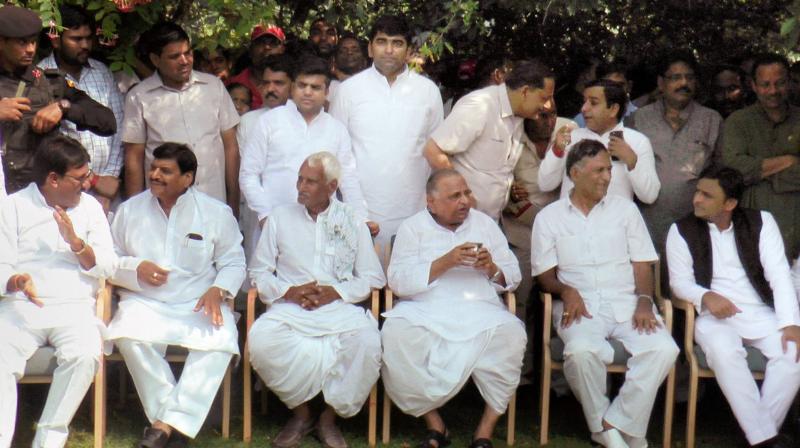 Lucknow: This Diwali has brought the family together but the same cannot be said for hearts. The Samajwadi Yadav clan, on Thursday, witnessed a grand reunion with all estranged leaders, except Prof Ram Gopal Yadav, coming together for a photo opportunity. Mr Akhilesh and Mr Shivpal sat at a distance from each other. But, both wore a smile for the cameras.

SP patriarch Mulayam Singh Yadav and his younger brother Shivpal Yadav went to SP president Akhilesh Yadav’s residence in Sefai in Etawah on the festival day. In a surprise gesture,  Mr Akhilesh touched his estranged uncle’s feet and the latter gave him his blessings. A large number of former ministers and legislators who were present there cheered gleefully. The younger generation of the Yadav clan including Dharmendra Yadav, Tej Pratap and Anshul Yadav were also seen at the celebrations along with the senior family members. A day earlier, Mr Mulayam had left his supporters shocked when he went across to the residence of Prof Ram Gopal Yadav and held a closed door meeting with the latter for about an hour. It may be recalled that the Samajwadi war had triggered off in a big way around this time last year when a SP MLA Udaiveer Yadav—known to be an acolyte of Prof Ram Gopal Yadav—had shot off a letter to Mr Mulayam asking him to step down from the party president’s post. In the letter, Udaiveer Yadav accused Mr Mulayam’s second wife, Sadhana Gupta Yadav, of practising black magic. The letter angered the Samajwadi patriarch to such an extent that he severed all ties with Prof Ram Gopal Yadav and publicly blamed him for creating a rift in the family. The meeting between Mr Mulayam and Prof Ram Gopal Yadav is therefore significant though the latter did not show up for the family photograph on Thursday.

Mr Shivpal also did not reveal any major thaw in his relationship with his nephew Mr Akhilesh. “Akhilesh Yadav is the party president and it is for him to take it the party forward”, he said. He also downplayed the grand reunion when he said, “The family always celebrates festivals together”. Mr Mulayam, however, emphasised that “My entire family is united and there is no discord. This is the reason that we have come to Sefai to celebrate Diwali”. Sources, meanwhile, said that Prof Ram Gopal Yadav differed with Mr Mulayam on a number of issues though he did not say so.

He, later, held another meeting with Mr Akhilesh whom he has been supporting in the family war.