Paswan said that the manifesto is based on his party’s vision of “Bihar first, Bihari first” 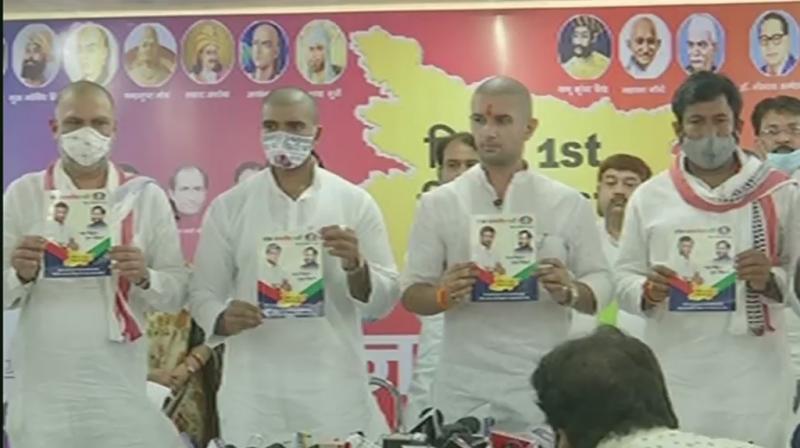 LJP releasing its manifesto on Wednesday.

During the event, Paswan said that the manifesto is based on his party’s vision of “Bihar first, Bihari first”, which will resolve many serious problems being faced by the people of the state.

The manifesto promises to create job opportunities, better policies for education, health and industrial growth in the state. The vision document also emphasizes on constructing a grand Sita temple in Sitamarhi on the lines of Ram Temple in Ayodhya to promote religious tourism in Bihar.

"There is tremendous scope for religious tourism in Bihar. We can construct a grand Sita temple in Sitamarhi and connect it with Ayodhya. Besides, there are other religious centres in the state which needs to be developed," Paswan said.

Highlighting the failures of the state government led by Chief Minister Nitish Kumar, he said that the vision document has been prepared based on ideas and suggestions received from four lakh Biharis.

"The state will be ruined if Nitish Kumar becomes the Chief Minister again by mistake," Paswan said while releasing the manifesto at his party’s office in Patna on Wednesday.

Paswan who broke away from the NDA citing ideological differences with Chief Minister Nitish Kumar is contesting 143 out of 243 seats in Bihar. On many seats, he has fielded candidates against the JD(U) and two other NDA partners HAM and VIP.

He recently created a stir in Bihar politics by giving tickets to several sitting BJP MLAs after their seats went to the JD(U). The LJP had earlier decided not to field any candidates against the BJP during the entire polls.

"I am fighting this lone battle to bring back the lost dignity of Biharis. Time has come when Nitish Kumar should explain why there are no industries in the state despite him being in power for 15 years. He keeps giving excuses that investment or industries couldn’t come to Bihar because it is a landlocked state then why other states like Punjab and Haryana have developed despite facing similar problems," Paswan said.

He added, "Instead of using helicopters I will be travelling by road. Chief Minister Nitish Kumar should also travel by road to see the results of his development. He only knows what his officials have been informing him but the situation is completely different on the ground. He should listen to what people have to say about his policies and development of the state."