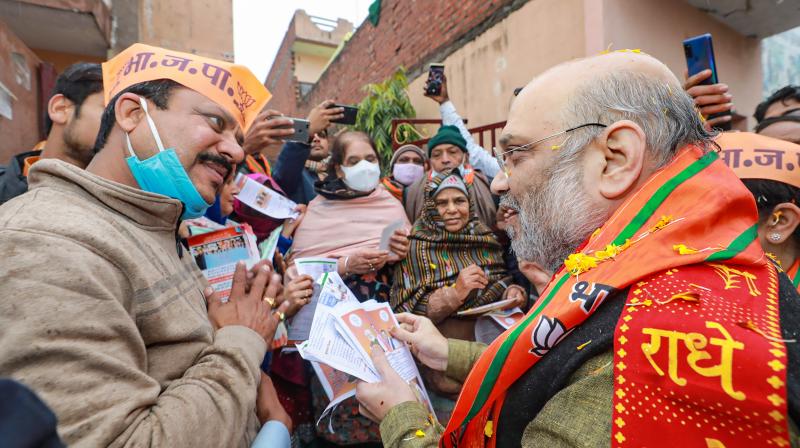 Union Home Minister Amit Shah interacts with a resident during his door-to-door campaign ahead of Uttar Pradesh Assembly elections, in Kairana. (PTI Photo)

Kairana: Putting into the spotlight the issue of alleged exodus of Hindus from Kairana before 2017, Union Home Minister Amit Shah on Saturday visited the affected families who have since returned here as he began his door-to-door election campaign in western Uttar Pradesh.

Asserting that the people of Kairana were no longer living in fear, Shah said a satisfactory law and order situation is the primary condition for development and the Yogi Aditynath government has ensured this in Uttar Pradesh.

Accompanied by party workers and leaders, wearing saffron caps and stoles, Shah walked in the rain-drenched lanes in the winter chill and distributed pamphlets on the achievements of the BJP government, amid slogans of 'Jai Shri Ram' and 'Bharat Mata ki Jai'.

The choice of Kairana for Shah's first political programme in Uttar Pradesh after the assembly poll dates were announced is significant as BJP leaders had alleged that a large number of Hindus were forced to migrate from the area due to threats during the Samajwadi Party rule, making it a big poll issue in 2017.

In the recent election rallies, top BJP leaders have been reminding the voters of the situation during the SP reign while claiming an improved law and order under the Yogi Adityanath government.

The issue, however, has had communal overtones and was seen as a polarising factor in the last polls.

"For the development of any state, the primary condition is that its law and order should be proper. This is Kairana from where people used to flee earlier, and today when I went on around, the people told me that 'Modijee kee kripa ho gayee'.

"Yogiji has improved the law and order. Those who forced the exodus have had to flee. This is the kind of confidence we are seeing in the people of UP. I think that in the coming days, Uttar Pradesh will become the most developed state of India," Shah told reporters here.

The Union Home Minister met the "victim" families who have returned to Kairana after the BJP came to power.

"They said that they do not have any fear now, and they are peacefully doing their business activities," Shah said.

Security personnel had a difficult time as crowds jostled to see the BJP leader.

"I would like to tell the people of UP that if you want to retain the law and order situation in UP, end appeasement and the culture of working for one caste, and develop UP under the leadership of Modijee, then the government of Yogi Adityanath should be formed once again," Shah later told reporters.

He appealed to the people of western UP to come out and vote on February 10.

"'If owing to COVID guidelines, our workers are not able to reach you, then you should cast your vote early in the morning keeping in mind the five years of hard work of the BJP and the achievements of seven-and-half years of Modiji."

He exuded confidence that the BJP will win 300 seats in the 403-member UP Legislative Assembly.

The Union Home Minister noted that he is coming to Kairana after January 2014.

''Today after coming to Kairana, I am feeling at peace due to the atmosphere here.

"After 2014, Prime Minister Narendra Modi took the reins of development of UP in his hand. After becoming the chief minister of UP in 2017, Yogi Adityanath accelerated the pace of development. In the entire state, a new wave of development and enthusiasm can be seen," Shah said.

He listed various achievements of the government including the building of roads, airports and medical colleges and provision of cooking gas for the poor, toilets, free vaccines during COVID and free ration.

"All these schemes were sent by Modiji, and Yogiji implemented at the ground level," he said.

The residents of the area spoke about security being the most important issue for them and some showered flower petals on the BJP leader and chanted 'Modi-Modi'.

Security personnel, however, had a difficult time as crowds jostled to approach the BJP leader.

The BJP has fielded Mriganka Singh, eldest daughter of late Hukum Singh who had won the seat several times, from Kairana against the RLD-Samajwadi Party candidate Iqra Hasan.

Iqra Hasan was fielded after political adversaries attacked the SP for giving a ticket to tainted sitting party MLA Nahid Hassan who was arrested under Gangster Act on January 15 after filing his nomination. Kairana is a city and municipal board in Shamli district in western UP.

Shah has been again given the task of overseeing the BJP campaign for assembly elections as he is known to have a good understanding of caste dynamics in the state and effective coordination with workers across constituencies.

He was the chief architect of the BJP's stupendous wins in the 2014 and 2019 Lok Sabha elections and 2017 assembly polls in the bellwether state.

Elections to the Uttar Pradesh Assembly will be held in seven phases starting from February 10.