Amit Shah, released the manifesto in Kolkata on Sunday, with an eye on the vote bank of Hindu migrants 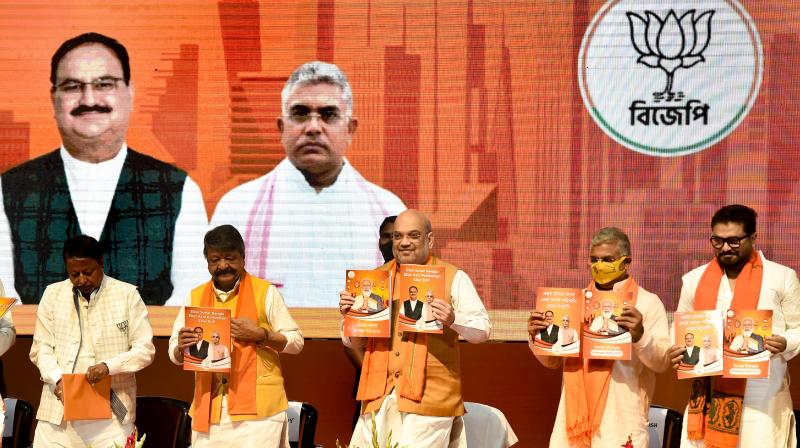 Amit Shah, hurried through his promises in a brief 13-minute speech in front of what appeared to be a thin crowd.. (Photo: PTI)

Kolkata: Using its manifesto “Sonar Bangla Sonkolpo Potro 2021” to end the TMC’s rule in West Bengal, the BJP on Sunday promised to implement the Citizenship Amendment Act in its first Cabinet meeting if it comes to power in the state.

Union home minister Amit Shah, releasing the manifesto in Kolkata on Sunday, with an eye on the vote bank of Hindu migrants, also said the BJP would earmark Rs 10,000 as annual financial aid to each refugee family for five years and a monthly pension of Rs 3,000 to Matuas and Dalpatis, while wooing Gorkha communities with recognition to 11 sub-tribes under the Scheduled Caste category.

Free public transport for women, a hike in widow pension from Rs 1,000 to Rs 3,000 and a 33 per cent quota for women also found a place in the BJP’s manifesto.

Other key sops include an end to infiltration, official language status of Bengali, implementation of the PM Kisan Samman Nidhi and Ayushman Bharat, building three new AIIMS in West Bengal (North Bengal, Jangal Mahal and Sunderbans), award of the Seventh Pay Commission hikes for state government staff, no fee for girls from KG to PG in government schools, Bengali to be made mandatory in school education till Class 10.

The BJP will also probe corruption in Central funds allocated for Cyclone Amphan and other calamities and compensation, apart from providing compensation of Rs 25 lakhs for each family which lost a member in political violence.

Earlier, Mr Shah lashed out at chief minister Mamata Banerjee and her MP nephew Abhishek Banerjee at a BJP rally in Egra of East Midnapore, where three-time Trinamul MP of Contai and former Union minister Sisir Adhikari, the father Suvendu Adhikari, defected to the BJP.

He alleged: “An amount of cut money exists in every work here. It comes through Tolabaji (extortion). Mamata Didi often asks about the value of Rs 500? Didi, your concern is different. Cut money of Bhatije reaches you. But for the labourers of Bengal, Rs 500 is a big amount. Mamataji wants to make Bhatije CM while Modiji wants to build a Sonar Bangla. Don’t you know Bhatije? Now tell me whether Bhatije needs to be made the CM or a Sonar Bangla must be built.”

Mr Shah, however, hurried through his promises in a brief 13-minute speech in front of what appeared to be a thin crowd. His recent call for the BJP bagging 200-plus seats out of 294 was also missing, in the wake of low turnouts in campaign rallies and massive statewide dissent within the saffron party over the distribution of tickets, which had forced him to make an overnight stay in Kolkata last week to pull up party leaders.

Hailing the PM and Mr Shah, Mr Adhikari alleged: “The way I was thrown out of the party (TMC) while my family was heckled is very painful and sad.”