India   Politics  22 Apr 2019  If any rich doesn’t return loans to bank, then he will not sleep comfortably: PM
India, Politics

If any rich doesn’t return loans to bank, then he will not sleep comfortably: PM

It's okay if national security issues are not highlighted in local elections, but in Lok Sabha polls it is an important topic, Modi said. 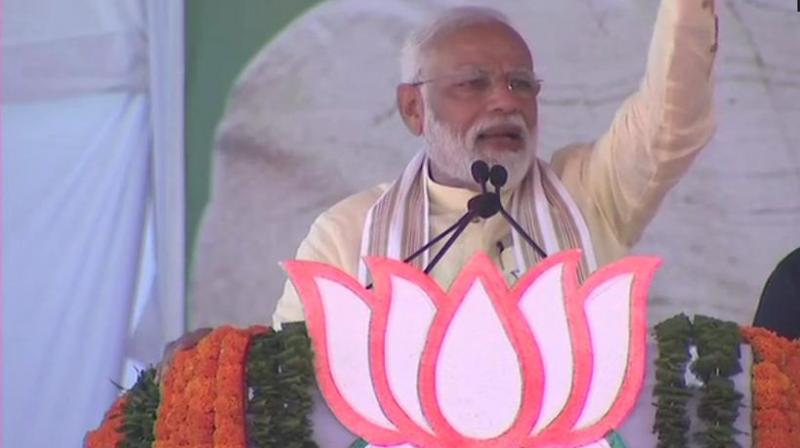 Prime Minister Narendra Modi on Monday said his government had taken strong action against terrorism and that the Congress does not understand the importance of the issue because of its 'narrow mindset'. (Photo: File)

Udaipur: Prime Minister Narendra Modi on Monday said his government had taken strong action against terrorism and that the Congress does not understand the importance of the issue because of its "narrow mindset".

"Modi is taking action against terrorism. Modi is hitting them in their homes," the Prime Minister said, in an election rally here. He said national security is "very much" the issue of Lok Sabha elections, but the Congress, due to its "narrow mindset", does not understand this.

"Congress and its 'mahamilavati' (wordplay on mahagathbandhan) say Modi should not talk about national security and terrorism in elections. Someone else may get deceived but not Modi," he said.

It is okay if issues like national security are not highlighted in local elections, but in Lok Sabha polls it is very much an important issue, Modi said.

"They (opposition) have a narrow mindset. Even after 60 years, they do not understand what the issues of the country are. They are roaming around the country with five-six abusive words," Modi said.

Targeting Congress leaders for asking for evidence of surgical strikes, Modi said the 'saboot gang' has put the country down, but people have now given the Opposition 'saboot' (evidence) in the initial phases of polling in the country.

"Will you be trusting 'sapoot' (soldiers) or those who demand 'saboot'," he asked. The Prime Minister targeted the previous UPA government, saying that it pressured the banks to give loans to "its millionaire friends, but our government gave loans to the poor, tribals and youths under the MUDRA scheme".

"Now, if someone has fled abroad, either he will have to return or he will be extradited just like Michel 'mama' of Naamdaars. If any rich does not return money taken as loans from the bank, then he will not be able to sleep comfortably," he said, referring to British-national Christian Michel, the alleged middleman in the AgustaWestland VVIP chopper case who was arrested after his extradition from Dubai.

He said the NDA government has showed that running an honest government in the country is possible. Modi said the foundation which will be laid in the next five years will decide the future of the 21st century.

"The upcoming polls are very important for those who are going to vote for the first time. Those who are born in the 21st century will nurture dreams and realise them in this century. A strong foundation will be laid in the next five years," Modi said.

The Prime Minister said Congress knows very well how to spread lies and do manipulations. In the rally, Modi highlighted the achievements of his government and sought vote for the BJP.