‘You (Yeddyurappa) don't smile, you also earlier helped in eloping,’ the Speaker said during the debate on confidence motion in Assembly. 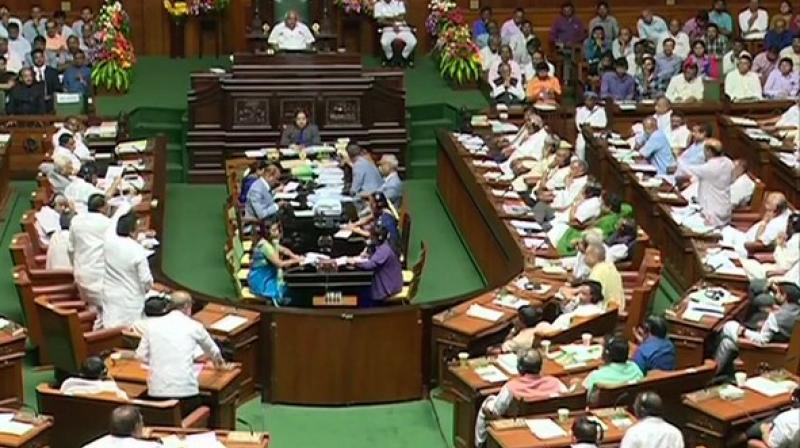 The Congress-JDS government fell into a minority earlier this month following the resignation of several dissident MLAs. (Photo: ANI)

"Somebody said to Pandit Nehru that Congress MLAs have become elopers. Nehru said it actually depends on the potency of the person, if they are able to take away the person from this side. So, at one point you (Siddaramaiah) were potent and helped them elope. You (Yeddyurappa) don't smile, you also earlier helped in eloping," the Speaker said during the debate on confidence motion in the House.

Participating in the debate, Law Minister Krishna Bhyre Gowda said, "Speaker, you had said that whip will be considered under the tenth schedule. Hence, I welcome it. This will give out a message to the MLAs. A few MLAs have already tender their resignations to you after which the opposition has raised that the govt has no confidence and the numbers. Hence, Chief Minister went for the trust vote."

BJP's Jagdish Shettar later said, "We spoke about it on Friday as well. That day, we saw allegations against H Vishwanath. Now it's these MLAs. There is a procedure to speak about these MLAs or ministers. They should file a complaint and then go ahead."

The Speaker said, "Generally as per our rules, if there are allegations against MLAs or Ministers, then they have to file a complaint. But, MLAs should have written a letter to me. They're the ones who have been voted to power. They should be present here and defend themselves in the house. But when they're not present here, the party members will speak about them and make allegations against them. That's because the MLAs have not come to the house."

"I'm worried about the people of Karnataka who have voted them to power. They will be left without an MLA. If the ruling party has documentary evidence, please submit it to me. If you do not have, then I'll have to expunge it from the records," he said.

The Speaker said If the MLAs feel that they were under threat, they can approach him and he would give them security. "It's their wish if they want to attend the session or not."

The Congress-JDS government fell into a minority earlier this month following the resignation of several dissident MLAs. Sixteen MLAs from the ruling coalition including thirteen Congress and three JD(S) MLAs have resigned.