India   Politics  22 Jul 2019  Why BJP not accepting they are behind 'operation lotus' in K'taka: DK Shivakumar
India, Politics

Why BJP not accepting they are behind 'operation lotus' in K'taka: DK Shivakumar

DK Shivakumar said, "Why is the BJP not accepting it wants the chair?' 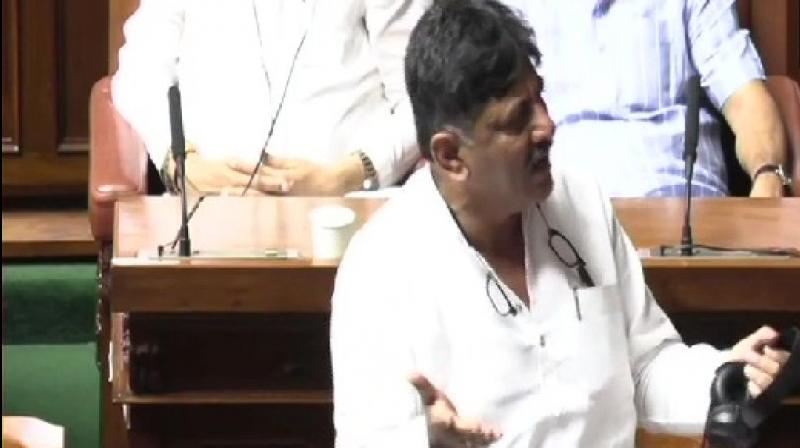 Earlier in the day, Shivakumar had attacked the BJP saying the party is in a hurry to come to power in the state and using the Governor of Karnataka for the same. (Photo: ANI)

Bengaluru: Congress leader DK Shivakumar on Monday hit out at BJP, saying why they are not accepting that they are behind 'operation lotus' in the state.

Speaking during the discussion on the trust vote in Karnataka Assembly, Shivakumar said, "Why is the BJP not accepting it wants the chair? Why are they not accepting the fact that they are behind 'operation lotus'? They should accept that they have spoken to rebel MLAs."

Earlier in the day, Shivakumar had attacked the BJP saying the party is in a hurry to come to power in the state and using the Governor of Karnataka for the same.

His statement came after the Supreme Court earlier on Monday refused to give an early hearing on a plea by two independent Karnataka legislators seeking a direction to conclude the floor test in the Assembly on Monday.

"Supreme Court has very clearly said that they can't fix the timing. It's obvious that it is up to the Speaker and Speaker has to take a call. I think a lot of issues have been going on. (For) BJP it is better to wait... It shows that there can't be any deadline for this. It is better to just have a full discussion... When Atal Bihari Vajpayee government was there, the floor test had taken some 10 days. So, let us not be in a hurry. BJP (is in) hurry for power... They are using the Governor of Karnataka," Shivakumar had told ANI here.

Earlier on July 14, Shivakumar had attacked BJP, saying "They (BJP) they should openly tell that they "need power and we are power-hungry, we want to form the government here and we are doing this operation lotus."

The Congress-JD(S) government slumped into a minority earlier this month following the resignation of several dissident MLAs. Sixteen MLAs from the ruling coalition including thirteen Congress and three JD(S) MLAs have resigned.

On Friday, the Assembly failed to meet two deadlines set by Governor Vajubhai Vala to complete the trust vote. After that, Chief Minister Kumaraswamy moved to Supreme Court challenging the Governor's directive to the government saying it was in violation of well-settled law laid down by the court.

The state Assembly has 225 members, including one nominated MLA. The halfway mark in the 225-member Assembly is 113.