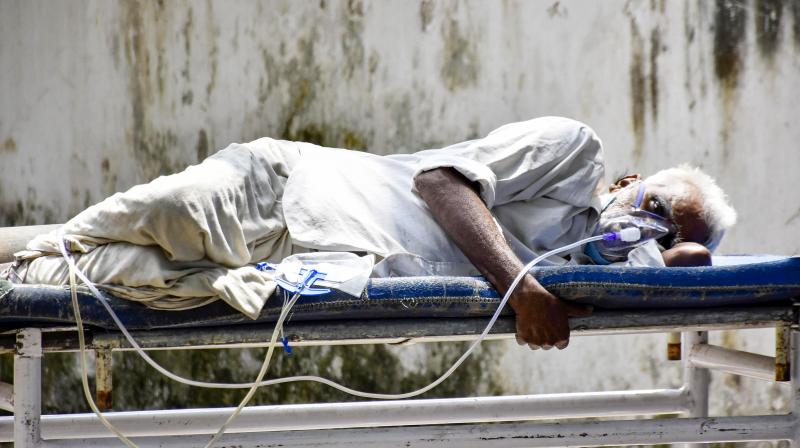 A file photo of COVID-19 patient on oxygen support waits to be admitted at Patna Medical College and Hospital, during the second wave of coronavirus in Patna. (PTI)

New Delhi: As the Opposition parties, including the Congress, AAP and Shiv Sena, tried to corner the Narendra Modi government over its written reply in Parliament that no death due to oxygen shortages had taken place in the country, the ruling BJP on Wednesday reminded the Opposition parties that health was a state subject and the Centre only compiles the data sent to it by the states and Union territories, and no state or UT in their data reported deaths due to oxygen shortage in the Covid-19 second wave.

Reacting to the government’s reply in the Rajya Sabha, AICC general secretary Priyanka Gandhi Vadra claimed the deaths happened because “in the pandemic year, the government increased oxygen exports by about 700 per cent”. She also alleged that the deaths occurred as the government did not arrange tankers to transport oxygen and ignored the advice of the empowered group and a parliamentary committee.

Accusing the Opposition parties and their leaders, including Congress’ Rahul Gandhi, of having “double standards” and doing politics over the Covid-19 pandemic, BJP spokesman Sambit Patra said the states where these parties were in power had claimed that no one died there due to the lack of oxygen.

“You (Rahul) have acted as a Twitter troll throughout the pandemic by writing two-line lies frequently… The Opposition parties need to be exposed and should be questioned why they claim something in public and something else before the court”, said Mr Patra.

Citing the affidavits submitted in the Bombay high court and Delhi high court respectively by the state government saying no death due to oxygen shortages was reported in Maharashtra and Delhi, the BJP attacked both the Opposition parties of criticising the Centre over the issue. Mr Patra also quoted a statement by Chhattisgarh health minister T.S. Singh Deo that the state was an oxygen surplus state and reminded the AAP of the reported deaths of 21 people at Delhi’s Jaipur Golden Hospital in April, when the committee formed by the AAP after the high court order and the Delhi government had said those who died had co-morbidities.

“These Opposition-ruled states had spoken about patients dying due to the oxygen crisis when the second wave was peaking as they wanted to target the Modi government, but have taken a different stand in writing and in their submission to the courts,” said Mr Patra, adding that it only showed they wanted to politicise the whole issue.

Taking on Shiv Sena leader Sanjay Raut, who said he was “speechless” and that a case should be filed against the Centre for “lying”, minister of state for external affairs Meenakshi Lekhi responded: “Mr Sanjay Raut, I am aghast at the doublespeak of double defaulters, the Shiv Sena and the Congress… Please provide the number of deaths in the state of Maharashtra due to oxygen shortage to the Central government and also to the press. (The) same logic applies to Delhi, which was the epicentre.”

After the BJP accused the AAP of double standards, AAP leader Manish Sisodia, Delhi’s deputy chief minister, accused the BJP-led Central government of not allowing the formation of a committee for probing deaths caused due to the oxygen shortage during the Covid-19 second wave in Delhi.