The Delhi CM took the initiative after keenly following every statement and tweet of the legendary actor these past few months, the source said. 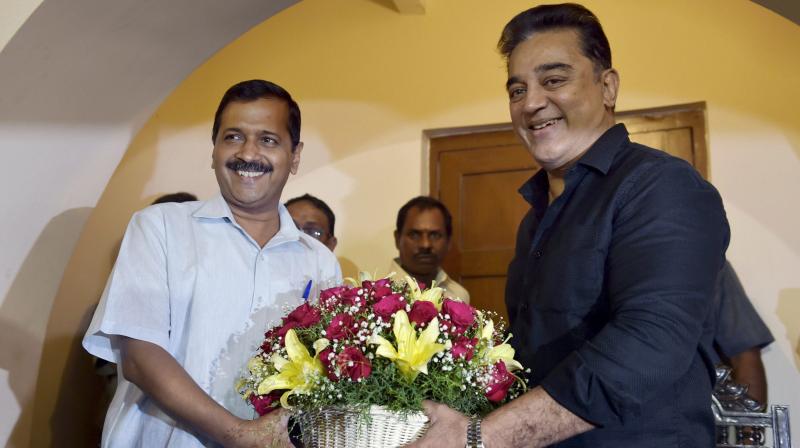 Chennai: Actor-activist Kamal Haasan said he had travelled further on his ‘learning curve’ after meeting Delhi chief minister Arvind Kejriwal at his Alwarpet home here over lunch on Thursday when the star-turned-politician shared notes on their “common passions” — fighting corruption and communalism.

A highly placed source told The Asian Age that the guest flew back to Delhi filled with not just good south Indian food but also with a “lot of mental fulfilment and happiness” as the multilingual star gave him very strong indications he would join his Aam Aadmi Party to strengthen his anti-corruption campaign that has been creating a big buzz in this part of the country — exciting the educated class while irritating vulnerable politicians.

The source said Mr Kejriwal, who had his political teeth cut in Anna Hazare’s anti-corruption movement bringing the UPA-II government to its knees, journeyed to Chennai “to personally invite Kamal to join hands with him to give a corruption-free and communalism-free India to future generations”.

The Delhi CM took the initiative after keenly following every statement and tweet of the legendary actor these past few months, the source said.

“I am honoured that Kejriwal decided to visit my house. This house has been political since my father’s time and I was the one who was away from politics. The purpose we got together here is singular — he has a national profile of fighting against corruption and communalism. And I also have a little reputation similar to that and it is no wonder that we decided to have a dialogue on the existing situation,” Kamal said.

“I was very happy when I learnt there are large number of people in this country who are honest,” Mr Kejriwal said.