Yadav was the Uttar Pradesh chief minister during Ram Janmabhoomi movement spearheaded by the VHP. 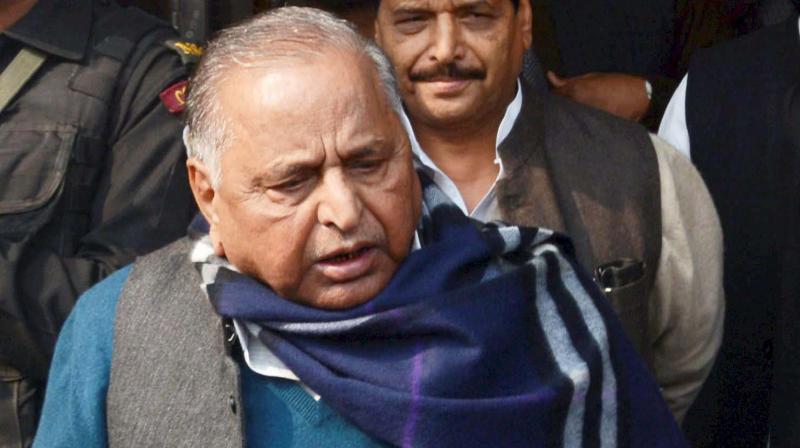 The former Uttar Pradesh chief minister said 28 people had lost their lives in the police firing at Ayodhya on October 30, 1990. (Photo: File)

Lucknow: Samajwadi Party founder Mulayam Singh Yadav on Wednesday justified his order to open fire on kar sevaks marching towards Ayodhya in 1990, saying if even more people were required to be killed for the country's unity and integrity, the security forces would have done it.

He was addressing the SP headquarters where his 79th birthday was celebrated in a grand manner, sending a message of all-is-well in the party.

"Desh ki ekta ke liye aur bhi maarna padta toh suraksha bal maartey (if even more people were required to be killed for the sake of country's unity and integrity, the security forces would have done it)," he said.

The former Uttar Pradesh chief minister said 28 people had lost their lives in the police firing at Ayodhya on October 30, 1990.

Yadav said that during a discussion with Atal Bihari Vajapyee, the former prime minister had said that 56 persons were killed in Ayodhya.

"I had arguments with him. In reality 28 were killed. I came to know the toll six months later and I helped them in my own way," he said.

On the VHP's call, a lakh kar sevaks from across the country had assembled in Ayodhya for the construction of a temple at the disputed Ram Janambhoomi-Babri mosque site.

The firing had earned him the nickname of 'Mullah Mulayam' by the Muslim community, which accounts for nearly 20 per cent of the state's population and is considered a force to reckon with by major political parties.

"A number of Muslims had taken up arms saying if their place of worship ceased to exist, then what would remain in the country," he said, justifying his action to save the Babri Masjid.

Claiming that the SP still enjoyed the support of Muslims, Yadav said, "Muslims still support the SP...it is the fault of our men that we did not get them for vote. They are still voting for the party and not against it. It's the shortcoming of our youth."

"It's matter of shame that we won only 47 of the 403 Assembly seats this time," he said, adding that even after ordering firing "when the opposition termed me as a hatyara (killer)", the SP succeeded in winning over 100 seats in 1993.

Yadav was the Uttar Pradesh chief minister during Ram Janmabhoomi movement spearheaded by the VHP.