8 Cong leaders sworn into Karnataka cabinet ahead of 2019 polls

The new ministers were administered oath of office and secrecy at Glass House at Raj Bhavan by Governor Vajubhai Vala amid tight security. 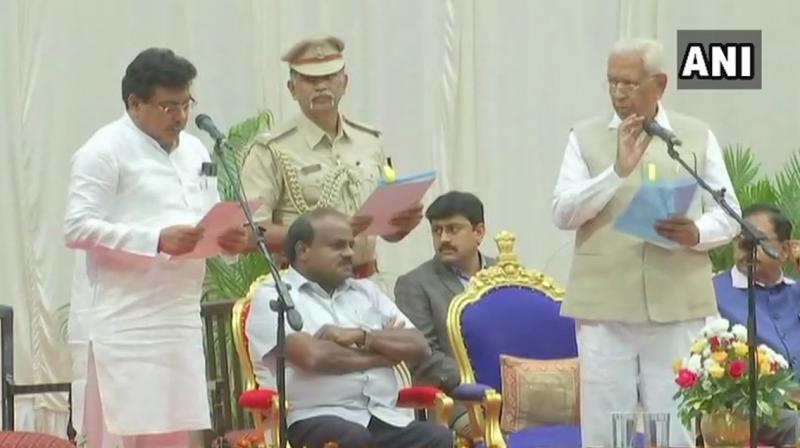 Two ministers -- Ramesh Jarkiholi (Municipal Administration) and R Shankar (Forest and Environment) -- were dropped. The new ministers were administered the oath of office and secrecy at the Glass House at Raj Bhavan by Governor Vajubhai Vala amid tight security.

Congress president Rahul Gandhi had given the go-ahead for the rejig Friday night after the state party leaders and AICC in-charge of Karnataka K C Venugopal met him and discussed the issue.

Ramesh Jarkiholi, who has allegedly been hobnobbing with BJP leaders and not attending cabinet and party meetings, has been replaced by his brother Satish Jarkiholi.

Shankar is an Independent lawmaker who faced the axe over his reported reluctance to be an associate member of the Congress.

Ramesh Jarkiholi has been claiming support of a sizeable chunk of party MLAs and had come under the party scanner over reports that the BJP was trying to tap him to remove the Kumaraswamy government.

The names of Jarkiholi and Shankar have been recommended to the governor for being dropped, the chief minister's office said.

Congress' coalition partner JD(S) was not part of this round of cabinet expansion and it is likely to induct new ministers from its side post 'Sankranti' (mid-January), party sources said.

According to the pact between the two at the time of formation of the coalition government in May, there were six vacant ministerial slots for Congress and two for JD(S).

This is the second expansion of the 26-member Kumaraswamy ministry.

With the cabinet expansion being deferred repeatedly, several aspirants, especially those from Congress, had openly expressed their displeasure over the delay, piling pressure on the party to fill its quota so as to avoid any trouble ahead of the 2019 Lok Sabha polls.

As the list of probable ministers came out, lawmakers who were aspirants for ministerial berths, came out openly, giving vent to their displeasure over being kept out.

Sowmya Reddy (MLA), daughter of senior Congress MLA and former minister Ramalinga Reddy, expressed resentment over her father not being considered for the post, pointing out his contribution for the party's growth in Bengaluru city.

Reddy's supporters staged a protest infront of the KPCC state headquarters here and tried to march to Raj Bhavan while the swearing-in ceremony was underway.

Sowmya said she had declined the post of parliamentary secretary.

Another aspirant and Hirekerur MLA B C Patil is also unhappy over not being considered for any ministerial post.

His supporters even staged a protest in his constituency. "I don't know the reason, but I have not got (ministerial post) this time also," he said.

On his next course of action, Patil said he would follow party workers' directions and work for his constituency's development.

Another Congress MLA B K Sangamesh from Bhadravathi, said he was the lone party legislator from Shivamogga district, the stronghold of BJP president B S Yeddyurappa, and said Siddaramaiah had promised to make him a minister.

He said he would decide his further course of action after discussions with party workers and resign if they asked him to do so.

Hagaribommanahalli MLA Bheema Naik hit out at the party leadership for giving chance to Parameshwar Naik and neglecting him.

Many senior congress MLAs were also reportedly miffed over their exclusion. As the voice of dissent became shrill, KPCC president Dinesh Gundu Rao warned that the party would not brook any indiscipline.

"Indiscipline or speaking against the party will not be tolerated. We have shown tolerance but it will not be possible to continue with the same..we will enforce discipline." However, he did not foresee any problem as fallout of Saturday's exercise.

The KPCC chief also sought to placate the disgruntled MLAs, saying the party would evaluate the performance of ministers after Lok Sabha polls, when the ministry would have completed one year and drop those found not upto the mark and give chance to aspirants in their place.

Reacting to the exercise, senior BJP leader B S Yeddyurappa said the disgruntlement would "explode", as thereare too many aspirants.

"In my opinion, dropping of Ramesh Jarkiholi would have repercussions..let's wait and see what will happen," he added.

Ruling out any attempts by BJP to take advantage of the situation, Yeddyurappa said, "We have 104 MLAs, we will work as opposition. We are watching the situation about confusion between Congress and JD(S) and its repercussions. We will call our legislature party meeting later and discuss with our high command on what step we should take."

In tandem with cabinet expansion, Congress has recommended appointment of 19 legislators as heads to boards and corporations and nine as parliamentary secretaries to ministers, besides three others as political secretary to the chief minister, state special representative to Delhi and deputy chairman of the state planning commission.