Clashes erupt between BJP, Congress workers in Goa over Rafale

FIRs have been files by both parties against each other alleging harassment and molestation of female protestors. 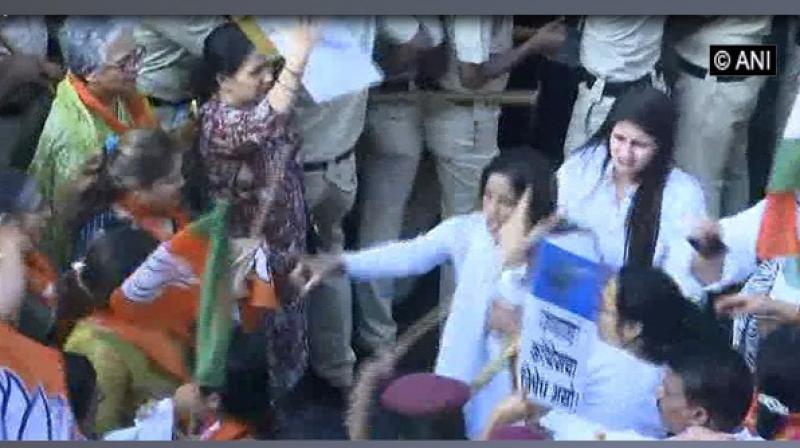 Panaji: A clash broke out between Bharatiya Janata Party (BJP) and Congress workers on Friday after the BJP workers organised a protest rally criticising the Congress leadership for raking up the Rafale deal issue.

The protest culminated near the state Congress headquarters, which led to verbal clashes between the Congress and BJP workers.

BJP state president Vinay Tendulkar who was present at the protest told ANI, "There was no clash as such; we were peacefully carrying out the protest. 10-12 Congress workers came and abused us and harassed our women. They attacked us, destroyed our flags. Clash was instigated by the Congress party."

However, Goa Pradesh Mahila Congress president Pratima Coutinho, alleged that she was abused by the BJP workers. "I was abused by male BJP workers, the worst part is that police also behaved like the puppets of the BJP. We were hardly 15-20 people who were attacked by BJP mobs. We condemn this attack. Whenever we have agitated we have not stooped down to this level," she told ANI.

Coutinho also filed an FIR against BJP workers for allegedly molesting her workers during the clash.

BJP worker Kavita Kandolkar also filed an FIR against Congress workers for allegedly molesting her workers and assaulting them in the same clash.