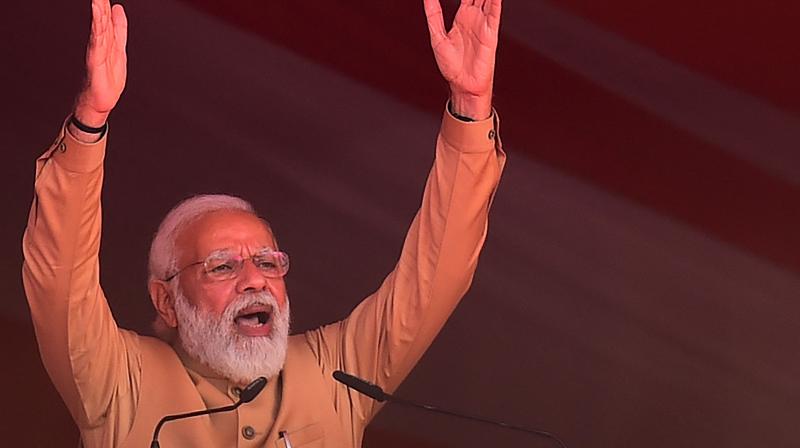 ndia's Prime Minister Narendra Modi gestures as he speaks during the launch of women-centric initiatives during an event held at the parade ground near the Sangam, the confluence of the rivers Ganges, Yamuna and Saraswati, in Allahabad on December 21, 2021. (Photo: AFP)

Prayagraj: Taking a swipe at his rivals, Prime Minister Narendra Modi on Tuesday said the government is trying to raise the marriage age of women to 21 so that they can have time to study and progress, but this has upset some.

Addressing a rally here in Uttar Pradesh, were assembly elections are due early next year, he also said 25 lakh of the 30 lakh houses given under the Pradhan Mantri Awas Yojana are registered in the name of women in the state. This shows the government’s commitment to “sacha (true) empowerment of women”, Modi said.

“We are trying to increase the age of marriage of women to 21 years so that they can have time to study and progress. The country is taking this decision for its daughters. Everyone is seeing who is having problems with this,” he said.

Samajwadi Party (SP) MPs Shafiqur Rehman Barq and ST Hasan had made adverse comments over the Centre's move to increase the legal age of marriage.

SP president Akhilesh Yadav had, however, distanced himself from the statements of his party's Sambhal and Moradabad MPs, saying the SP is progressive and the views expressed are personal.

In an apparent dig at the SP's rule in the state, Modi said, “Five years ago the mafia ruled the roost on the roads of Uttar Pradesh, and the worst sufferers were our sisters and daughters”.

“It was difficult for them to move out on roads and go to schools and colleges. But Chief Minister Yogi Adityanath has put these hooligans in their right place,” he said.

Hailing the Adityanath government, the Prime Minister said, “Now in Uttar Pradesh, there is security, rights and opportunities (for women). I am confident that with the blessings of our mothers and sisters, no one will push the state back into darkness again.”