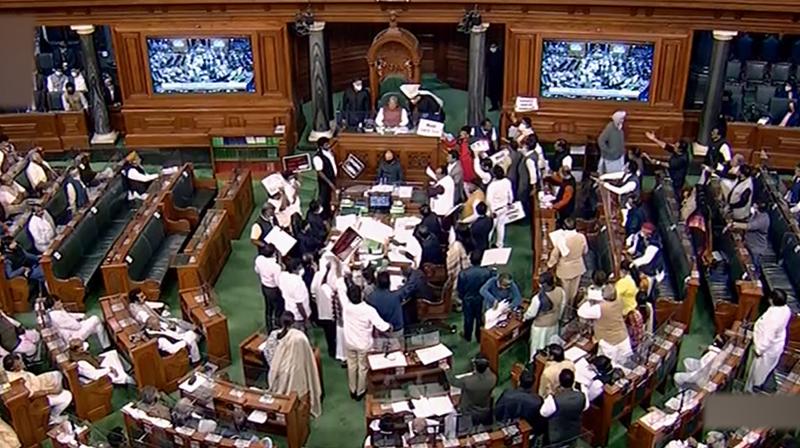 New Delhi: The government on Tuesday introduced the Prohibition of Child Marriage (Amendment) Bill 2021 in the Lok Sabha, which seeks to raise the age of marriage for women to 21 years across all religions. The bill, which sets 21 years as the uniform marriage age for both women and men, was later referred to the Parliamentary Standing Committee for wider consultations.

Union minister Smriti Irani called it a “decisive step” in the country’s history, but some experts stressed that legislative changes alone will not solve the problem of early marriages unless its root causes are addressed. The bill’s introduction was opposed by some members who claimed that it infringed upon several personal laws in violation of fundamental rights and demanded that it be referred to a parliamentary committee.

The bill was not on the morning revised business list and was introduced by Ms Irani in the Lok Sabha as part of the supplementary agenda. The Opposition MPs protested, alleging that the government was bringing in new legislation in “haste”' without consulting all stakeholders. Last week the Union Cabinet had cleared the proposal to introduce the bill in the ongoing session.

Experts are divided on the issue of raising the age of marriage for women with some saying it will go a long way in empowering women and others laying emphasis on addressing the root causes behind early marriages such as the lack of education and poverty.

Addressing a rally in Prayagraj, UP, Prime Minister Narendra Modi said: “We are trying to increase the age of marriage of women to 21 years so that they can have time to study and progress. The country is taking this decision for its daughters. Everyone sees who has problems with this.”

Soon after the bill’s introduction, Ms Irani urged the Chair to refer it to a standing committee.

Ms Irani said the bill also seeks to override all existing laws, including any custom, usage or practice governing parties in relation to marriage.

The Opposition members hit out at the government for bringing the bill in a hurry. Congress leader Adhir Ranjan Chowdhury said the manner in which the bill was introduced was reflective of the nefarious intentions of the government of not holding any consultations.

“We are in a democracy and 75 years late in providing equal rights to men and women to enter into matrimony,” said Ms Irani. Ms Irani said this is a “secular act” and “women from all religions, castes and communities should have equal rights in terms of marriage”. The minister said nearly 23 per cent of girls were married below the age of 18 years even though the law doesn’t allow it. She said that when there is 10 per cent chance of miscarriage among those who get pregnant between 15 to 18 years, this bill is being introduced to provide protection to them.

Ms Irani said if the Opposition members heard her patiently, they would have known the government was ready to refer the bill to the standing committee.

AIMIM leader Asaduddin Owaisi termed the bill a retrograde step. “This is against the right to freedom under Article 19. An 18-year-old can choose a Prime Minister, can have a live-in relationship, can have sexual relations under the POCSO Act, but the government is denying them the right to marriage. What have you done for the 18-year-old? The women’s labour force participation in India is lower than Somalia,” he added.

NCP leader Supriya Sule said this was the second or third time that the government was aggressively bringing in bills and no one from the Opposition was being consulted.

The amendments to the bill will become effective two years from the date it receives the presidential assent.

The Chartered Accountants, Cost and Works Accountants and Company Secretaries (Amendment) Bill 2021 was also referred to the standing committee. The committee’s report will have to be submitted during the Budget Session.