Voting for 39 seats in Tamil Nadu will be held on April 18 and result will be announced on May 23. 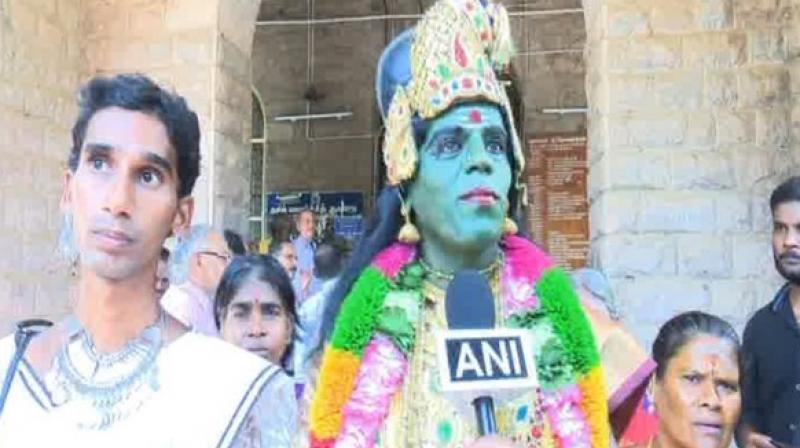 Kannamma was accompanied by two persons dressed like people belonging to the Muslim and Christian communities. (Photo: ANI)

Madurai: Transgender activist Bharathi Kannamma donned the avatar of Goddess Meenakshi as she filed her nomination for the upcoming Lok Sabha elections from Madurai.

Kannamma was accompanied by two persons dressed like people belonging to the Muslim and Christian communities. She will be pitted against R Gopalakrishnan, AIADMK's sitting MP from Madurai.

Earlier this month, Kannamma had expressed apprehensions regarding the date chosen by the Election Commission for polling in Tamil Nadu, as it coincides with the Chithirai festival in Madurai as well as Koovagam Koothandavar, a 3-day long festival of transgenders.

This came after representatives of the transgender community in Madurai wrote to District Collector S Natarajan seeking rescheduling of the Lok Sabha elections, which will be held on April 18 in a single phase.

Speaking to ANI on March 16, Kannamma had said: "We cannot accept the dates for two reasons. First, a huge number of people throng Madurai to witness the Chithirai festival. So, pilgrims attending it will not be able to cast votes. Secondly, transgenders from across the country will attend a 3-day long transgender festival in Viluppuram district from April 15-17. This will surely affect voter turnout."

"Nearly 6.5 lakh transgenders will take part in this festival. All of their representation will be neglected. I appeal to the Election Commission to reconsider the other date.”

Voting for 39 seats in Tamil Nadu will be held on April 18 and result will be announced on May 23.