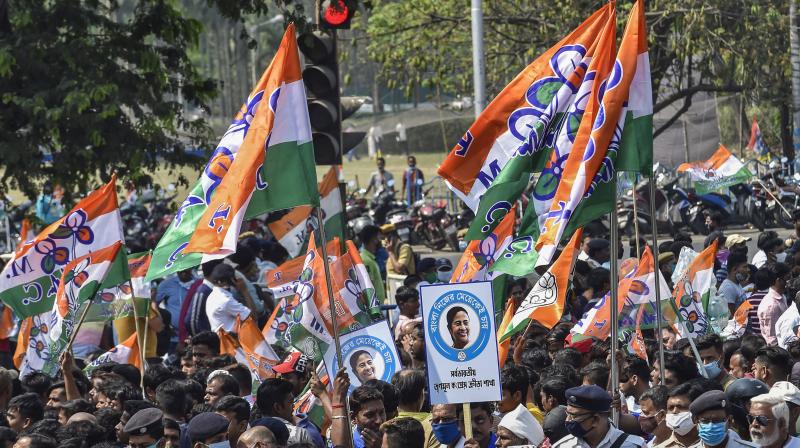 The electoral discourse in Bengal, where poll battles are fought on ideological lines, had in the past mostly steered clear of sub-nationalism like identity politics. (Representational Image/PTI)

Kolkata: With the "insider-outsider" debate in West Bengal gaining strength before the state election, Bengali sub-nationalism appears to have become visible like never before.

The ruling TMC has embraced it as its main poll plank to counter the rise of the BJP's Hindutva narrative in the state.

It has branded BJP as a "party of outsiders" and has fanned the 'Bengali pride' by coming up with a poll slogan "Bangla Nijer Meyekei Chai" (Bengal wants its own daughter) creating a poll narrative of sub-nationalism to counter the saffron party's identity politics.

The electoral discourse in Bengal, where poll battles are fought on ideological lines, had in the past mostly steered clear of sub-nationalism like identity politics.

"This is for the first time we have made Bengali pride our main poll plank. Bengali pride is not just about Bengalis; it appeals to all sons of the soil," senior TMC leader and MP Sougata Roy told PTI.

Another senior TMC leader said "divisive politics and religious polarisation can be countered with sub-nationalism and regionalism."

BJP has blamed Trinamool Congress for bringing up the issue of Bengali pride saying it is harping on nationalism, development and identity politics as it senses defeat in its citadel.

"BJP is in power in so many states, but we have never tried to impose any language or culture. This is a baseless allegation as TMC has nothing to showcase to seek votes," BJP state president Dilip Ghosh said.

BJP national president J P Nadda claimed at various poll rallies that only BJP can restore the Bengali pride and that "TMC represents everything that is opposite to it".

To counter the narrative and project itself as a party in sync with Bengali culture and ethos, BJP has propped up Bharatiya Jana Sangh founder Syama Prasad Mookerjee as its icon.

It has also been observing the anniversaries of Bengali icons Rabindranath Tagore, Swami Vivekananda and Bankim Chandra Chattopadhyay.

Parties cutting across political lines feel that the issue has its pitfalls and will have a cascading effect on the federal structure in the days to come.

They agree that sub-nationalism can no longer be ignored in Bengal as it is reflective of the state's socio- political history which has always preferred opposing or challenging the party at the Centre or a bigger political force and have refused submission.

Born out of the Congress on January 1, 1998, TMC had adopted the evocative slogan 'Maa Mati Manush' (Mother, Land and People) carefully blending socialism and secularism that countered the then communists and their doctrines.

The rise of BJP in Bengal's political map made TMC realise that its socialist slogan was not enough to offset 'Hindutva', especially when it has been branded by the saffron camp as a party that favours only minorities.

It then came up with the narrative of Bengali pride and insider versus outsider debate and has it as its main poll and ideological planks.

The desecration of the bust of social reformer Ishwar Chandra Vidyasagar during a BJP procession in the last phase of the 2019 Lok Sabha polls, followed by the publication of the final NRC list in Assam in August that year gave TMC a golden opportunity to brand BJP as an "anti-Bengali" party.

The NRC list had left out the names of 19 lakh people in Assam, many of them Bengalis.

The state BJP's over-dependence on the party's central leadership with leaders from other states calling the shots have not helped matters for the saffron party. It has in fact further fuelled the "insider versus outsider" debate.

BJP national general secretary and Bengal minder Kailash Vijayvargiya feels that TMC is only interested in winning the votes and has nothing to do with Bengali pride.

"These are gimmicks to win the election. Everybody knows how concerned TMC is about Bengalis and their welfare," he said.

It also promised a Gurudev Centre for Cultural Excellence and a film city was promised named after matinee idol Uttam Kumar.

TMC has blamed the ascent of BJP in Bengal's political sphere and the increased activities of far-right Hindu outfits which are more in sync with north Indian culture for the politicisation of ethnic sentiments in the state.

But a quick look at post-Idependence Bengal's socio- political history shows how Bengali sub-nationalism has always played a role before going dormant in the past few decades.

The effect of sub-nationalism in the state was first felt when Congress led by the then chief minister Bidhan Chandra Roy in the mid-fifties lost the election to nine municipalities and an assembly by-poll on the issue of merger of West Bengal and Bihar.

The Left Front and Praja Socialist Party had then opposed it tooth and nail stating that Bengalis would beome a minority post the merger.

Till the mid '90S the issue of Bengali pride was not overtly brought into play, as both the mainstream political parties - the Congress ande CPI(M) had several homegrown stalwarts. There were leaders like Jyoti Basu, Bhupesh Gupta, Indrajit Gupta from the Left and Siddartha Sankar Ray, Pranab Mukherjee, A B A Ghani Khan Chowdhury from the Congress.

However, the CPI(M), which over the years has moulded itself as a party of the Bengali bhadralok (gentleman) through its anti-Congress and anti-Centre stance, smacked of subtle sub-nationalism by often citing 'Centre's oppression against Bengal'.

Noted Historian Sugata Bose contends that sub- nationalism was always in the play in Bengal politics in a covert manner.

"The issue of Bengali sub-nationalism was there in post-Independence Bengal, though in a very subtle way. It was never a major rallying point. The Left's constant attack on the Centre and Congress alleging step-motherly treatment towards Bengal was aimed in that direction. "But after the formation of TMC in 1998, Bengali sub-nationalism was never an issue as the party and the Bengal CPI-M which it defeated were regional players," Bose, the Gardiner Professor of Oceanic history at Harvard University, told PTI.

"It is now back as a major poll issue as TMC, a regional party is fighting against BJP, a national party.

It has gained momentum as BJP does not have strong homegrown leaders in Bengal and is overdependent on central leaders," he said.

Several outfits like Bangla Pokkho, Jatiyo Bangla Sammelan and Bangla Sanskriti Mancha have emerged in the state's political landscape and they have accused the saffron camp of trying to "impose Hindi and north Indian culture" on Bengal. "The way Bengalis are demographically threatened by non-Bengalis, the day is not far when they will turn into a minority in their own land. This will not only be just in terms of population but also culturally. We are happy that Bengali sub-nationalism has emerged as a rallying point in this polls," Kaushik Maiti, a senior leader of Bangla Pokkho, told PTI.

These outfits have been raising the pitch for reservation for domicile Bengalis in jobs and education in the state.

The narrative has its drawbacks as it alienates the Hindi-speaking population, who are a deciding factor in at least 30 of the state's 294 Assembly seats.

Sensing this, the TMC has tied up with the RJD and Samajwadi Party for the assembly polls.

The two parties have offered unconditional support to it and will campaign for TMC in the Hindi-speaking belts of the state.

Political analyst Suman Bhattacharya feels that Bengali sub-nationalism will play an important role in the assembly poll and will be a deciding factor in several seats.

"It had never played such a major role in the polls. But Bengali pride and sub-nationalism will play a pivotal role this election and a decisive role in several seats," he said.

Poll analyst Biswanth Chakraborty believes that Bengali sub-nationalism is an urban phenomenon and will not impact rural Bengal.