The tweet ballooned to over a 1000 retweets and even more ‘likes’ within a matter of minutes. 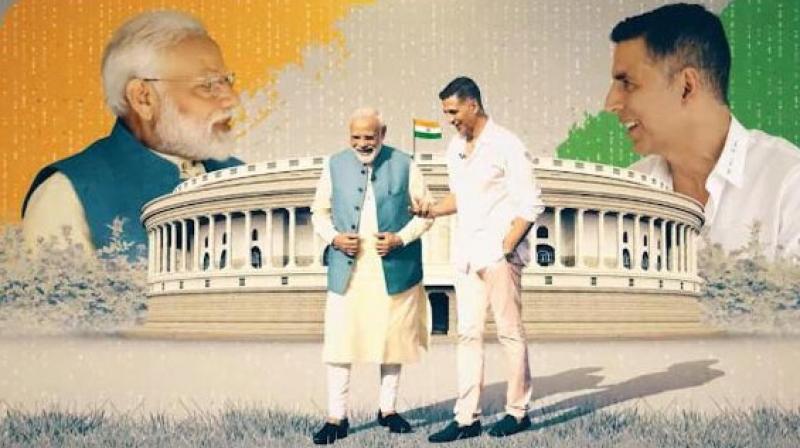 Video of this interaction would be aired at 9AM on Wednesday, a day after polling ended for the third phase of the Lok Sabha polls. (Photo: ANI twitter)

New Delhi: On April 21, Bollywood actor Akshay Kumar posted a cryptic tweet that sent the entire ‘Twitterverse’ in a tizzy and sparked intense speculation on the motive behind the tweet. “Getting into an unknown and uncharted territory today. Doing something I have never done before. Excited and nervous both. Stay tuned for updates,” posted Kumar in the middle of election fever in India.

The tweet ballooned to over a 1000 retweets and even more ‘likes’ within a matter of minutes. Most speculated that Akshay Kumar had decided to take the political plunge, much like his ‘Aflatoon’ co-star Urmilla Matondkar did when she joined the Congress a few weeks ago.

However, the ‘Khiladi’ superstar was merely teasing his fans about an upcoming video interaction that the star conducted with Prime Minister Narendra Modi in the lawns of the latter’s residence in 7 Lok Kalyan Marg. The over 1 hour long video interaction between PM Modi and Akshay Kumar was conducted with a caveat – a non-political theme, delving into life of Narendra Modi as a Prime Minister.

PM Modi and Akshay Kumar’s ‘non political’ interaction at 7 LKM to be released at 9 am tomorrow pic.twitter.com/vtdxkMSL2I

Video of this interaction would be aired at 9AM on Wednesday, a day after polling ended for the third phase of the Lok Sabha polls. Sources told ANI that the timing for this release was deliberate as they did not wish to be in any contravention of EC guidelines.

Short 30–40 second teasers of the interaction were released to the media with one of them showing Akshay Kumar quizzing PM Modi on what would be considered an unhealthy sleep cycle by most. “ You sleep only 3-4 hrs, a body needs atleast 7, right?” quips Kumar which elicited an anecdotal response from the PM. “When President Obama met me for the first time he asked me why do you do this? Now whenever we meet he asks me have you increased the amount you slept or now,” responded PM Modi to Akshay Kumar.

Akshay Kumar posted another tweet today. "While the whole country is talking elections and politics, here’s a breather. Privileged to have done this candid and COMPLETELY NON POLITICAL freewheeling conversation with our PM Narendra Modi . Watch it at 9AM tomorrow," informed Kumar.

A total of four teasers were released that presented a side of PM Modi far removed from the campaign rallies and television interviews dominating the political slugfest ongoing in these 2019 Lok Sabha elections.