In 2014 LS polls, Kher had won Chandigarh seat by defeating Pawan Kumar Bansal of the Cong party by a margin of around 70,000 votes. 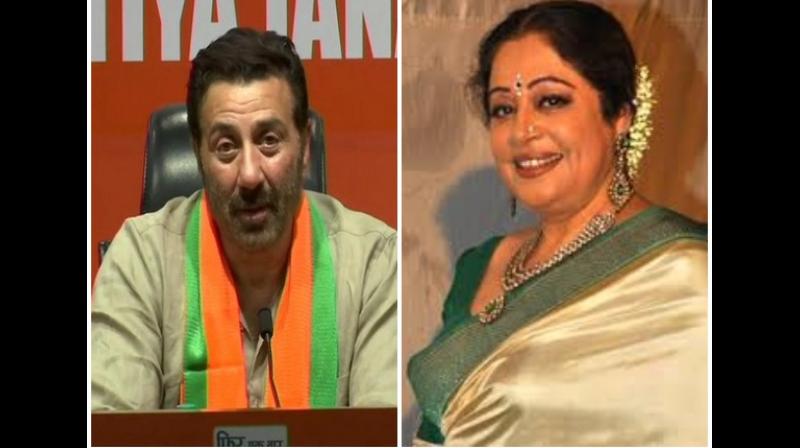 New Delhi: BJP on Tuesday fielded actor Sunny Deol from Gurdaspur Lok Sabha seat in Punjab, while retained Kirron Kher for Chandigarh seat, which she won by a margin of nearly 70,000 votes in the last Lok Sabha election.

The party has fielded Som Prakash from Hoshiarpur seat, which is reserved for the Scheduled Caste (SC) in Punjab. “The Central Election Committee (CEC) decided these candidates,” said Jagat Prakash Nadda, secretary, CEC, in a statement.

Jakhar had defeated Swaran Singh Salaria, a business tycoon, of the BJP by over 1,90,000 votes. The Congress party has repeated Jakhar from Gurdaspur seat this time too.

Deol, son of Dharmendra who recently did a roadshow for his wife and sitting MP Hema Malini in Mathura, had joined the BJP earlier in the day today.

“The way my papa (Dharmendra) worked with and supported Atal ji
(Atal Bihari Vajpayee), I am here today to work with and support Modi ji. My work will do the talking,” Sunny said after joining the BJP in the presence of Defence Minister Nirmala Sitharaman and Minister for Railways and Coal Piyush Goyal.

“I am indeed very happy to receive firebrand, popular, very committed to his art, young great artiste, from the Bollywood, Sunny Deol. The moment we got to know that he is coming into the party, I could only relate to the film ‘Border’ that he had made… He is such a hero who has artistic blood running in his family,” Sitharaman said.

Welcoming Sunny on board, Goyal said, “This reminds me of the moment when in 2008, Dharmendra ji was recuperating after a surgery, but still on party’s call he came to Parliament. Later he went back to the United States to finish his treatment. I have full faith that Sunny will work with the same passion.”