India   Politics  23 May 2019  At its weakest globally, the Left bows out in India
India, Politics

At its weakest globally, the Left bows out in India

With barely 5 seats to hang on to this time, its chances are less than bleak. 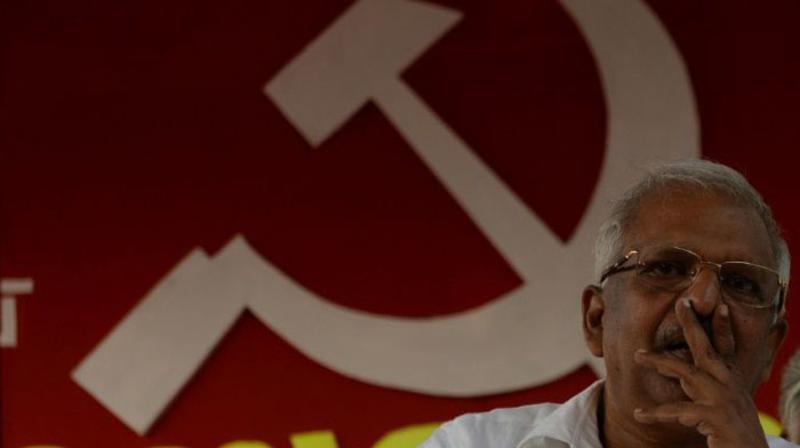 Indian freedom struggle and the political landscape of free India was, for a long time, hued with shades of red. (Photo: AFP)

Mumbai: In the light of the recent election results that are still coming out, the Left is practically nowhere to be seen.

Here’s a little history into the sickle and the hammer flag in India. A historic revolution shook the country of Russia, in the year 1917, overthrowing the Tsarist autocracy and the rise of the Soviet Union. It showed the people of the world that the common man held the power in themselves to rise up to overthrow their exploiters and establish a rule that was for the benefit of all.

Nearly a decade after this historic event, Jawarharlal Nehru paid his first ever land to the last of Socialism, something which he had been following very closely ever since its inception. His motivation was to find a solution to solve the problems of the British colony of India. He had studied the works of Marx and Lenin and was greatly influenced by the ideologies of development and socialism.

Now, as India neared the end of the first half of the twentieth century, the Marxist ideology of the working class, overthrowing the propertied exploiter, by sheer force, struck a chord deep within the hearts of the agitators of nationalism in India. For all those people who had started believeing that the Gandhian principles of peaceful demonstration was not as effective as the principles propounded by Marx and Lenin. Even a staunch Gandhian like Nehru had been inspired by it.

There have been a host of well renowned faces through the history of Indian independence struggle who have been strongly influenced by the ideas of Marx and Lenin but it wasn’t until Manabendra Nath Roy, the founder of the Communist Party of India, someone who had been personally mentored by Lenin in Russia to prepare the Indian public for revolution against the foreign colonisers. Despite the broad appeal of the so-called Leftism, it was MN Roy’s CPI and it’s later offshoots that went on to become the face of Left in India.

Hence, it can’t be denied that the Indian freedom struggle and the political landscape of free India was, for a long time, hued with shades of red. Post-independence, it was directly involved in the armed conflicts against the princely states who were unwilling to give up power. Not only that, they led up agrarian and trade union issues which soon led them to believe that they could even take some space in governance and not just on the streets with weapons in arms.

By 1952, it joined mainstream parliamentary politics. By 1957, the party, for the first time, came to power in Kerala and within two more decades, it gained firm footing in West Bengal and Tripura soon after. The expansion of ideologies led to arguments and soon, the fragmentation of the CPI into the CPI-Marxist in 1964 who eventually overshadowed the former in politics.

The CPI(M) soon had a dissension, leading to the formation of another, violent section known at the Maoist movement in India. Led by Charu Mazumdar, and starting with attacks in the village of Naxalbari (and the coining of the term, Naxals) exploded into a widespread violent movement spreading fromWest Bengal into states like Andhra Pradesh, Chhattisgarh, Jharkhand and as far as Maharashtra.

Incidents of violence in Maharashtra’s Gadchiroli have been in the news even recently and even though most of this movement has been vehemently crushed out, it still survives in pockets.

Even with the conflicts within the party, the Left Front in Kerala kept alternating with the Congress in presiding over the government, in West Bengal the CPI(M), once elected to power in 1977 under Jyoti Basu’s leadership, held on to power for the three decades until ousted by the now CM Mamata Banerjee. In Tripura too the CPI-M came to power in 1988, and except a brief moment of Congress rule between 1992 and 1998, the state was governed by the Left up until the overthrown by the early last year.

Over the last decade or so, CPI and the CPI(M) has been tragically ousted from the political landscape of India, mostly being replaced by the strong Hindutva motivated nationalism and votebank politicisation based primarily (again) on religion. Tripura, a state which had been strongly run by the CPI(M) for the longest time has now been taken over by Biplab Kumar Deb of the Bharatiya Janata Party. The BJP has now paved strong wide inroads in the state of West Bengal and is also slowly inching into Kerala but that still has some time to go.

Vijay Parshad, Director of Tricontinental Institute for Social Research and Chief Editor of Leftword Books, in a tweet said the reason for the tragic state of the Left has been, “The liberals & neoliberals have exhausted their agenda entirely, they are unable to provide solutions to the problems that capitalism has given the world. The Left is decidedly weak, at its weakest point globally.”

In that context, another thing that must be kept in mind is that culture and ideology aren’t the only factors that determine the chances of victory, or even survival in electoral politics. India adopted the policy of rapid industrialisation of the state in 1994, post which a spree of forcible land acquisition ensued leading to the alienation of a large rural public which created space for an alternate political party to come to the fore.

This first came to light in the state of West Bengal when the government run by Buddhadeb Bhattacharjee, for 11 years and by the party for more than 3 decades, was roughly ousted from the state in the year 2011 bringing Mamata Banerjee into the fore of politics in the state.

Apart from Tripura, West Bengal and Kerala, there is practically negligible presence of Leftist political parties present in the other states and it stands to reason that the chances of it surviving in the cut-throat competition, proved once again in the 17th Lok Sabha elections, 2019.

With barely 5 seats to hang on to this time, its chances are less than bleak. Looking over its brief history in Indian politics, its ending is coming soon but supporters of the ideology and scholars say the chances of this going completely out of fashion is highly unlikely, since it is an oppositional party. The rest only time can tell.