Irani appealed the District Magistrate to organise digital training for the Lekhpals. 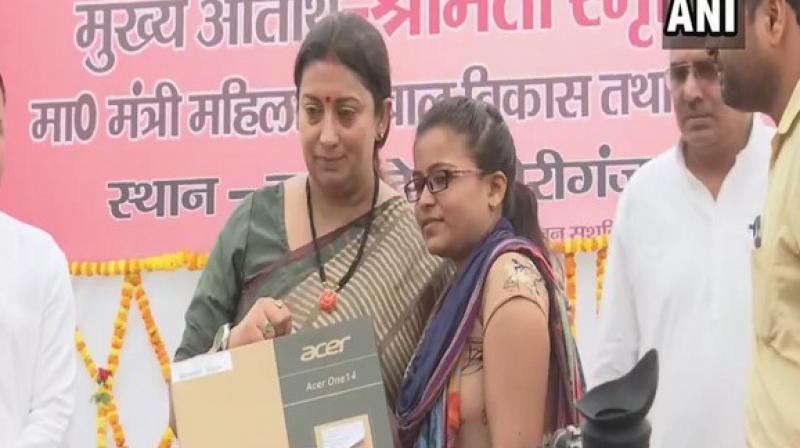 Irani was attending an event for the mass baby shower and 'Annaprashana' in Amethi's Gauriganj, where she distributed laptops to 240 Lekhpals. (Photo: ANI)

Amethi: Union Minister and BJP MP for Amethi Smriti Irani on Sunday distributed laptops to Lekhpals and asked them to avail digital services made available to them by the government.

"We should aim to set an example for the country by availing digital services in every village so that people don't have to line up outside government offices," Irani said.

Irani was attending an event for the mass baby shower and 'Annaprashana' in Amethi's Gauriganj, where she distributed laptops to 240 Lekhpals.

"I don't believe in long speeches. I want people's issues to be addressed so that they can go home," the union minister said.

Irani appealed the District Magistrate to organise digital training for the Lekhpals.

"You are a part of the government that reaches every village and house. People expect solutions to their problems through you. Get digital training and go to every village in the district. Keep in touch with the police and maintain law and order," the lawmaker appealed the Lekhpals.

"I assure the people of Amethi that the government is devoted to you 24 hours a day," she added.