‘Why not 50 per cent? I would love to see half of the members in the House to be women,’ MP Sumalatha Ambareesh said. 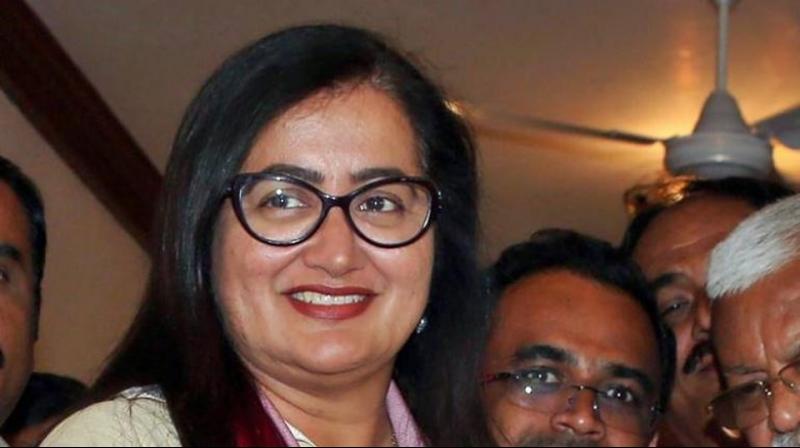 The MP asserted that being an independent candidate freed her from the burden of towing the line of a particular party and could raise the issues of her constituency independently. (Photo: PTI)

New Delhi: New actor-turned-politician Sumalatha Ambareesh, who made history by becoming the first independent woman candidate to enter the Lok Sabha from Karnataka, in the recently concluded Lok Sabha polls, envisions a House that comprises 50 per cent female members.

“We have debated a lot about providing 33 per cent reservation to women in Lok Sabha. But why not 50 per cent? I would love to see half of the members in the House to be women,” the MP from Mandya seat of Karnataka told IANS.

Talking about  her first time experience in the Parliament, “My first time at Parliament was like the first day at school or college. It was a mix of nervousness and excitement. The learning curve however is exciting,” she also said.

The MP asserted that being an independent candidate freed her from the burden of towing the line of a particular party and could raise the issues of her constituency independently.

She also said, among other things, revival of the lakes is on her priority. “During my campaign, I saw that many lakes have dried up. Women have to walk several miles to fill water to meet their daily requirement. I have already met the Jal Shakti Minister and have submitted a memorandum in this regard.”

“Mandya is a sugarcane growing belt. The farmers are not getting proper price for their produce; I want to raise this issue on priority. Connectivity and road infrastructure is another area of concern, which I would like to bring the government’s attention to,” she told AINS.

Ambareesh also mentioned that she received support from unexpected quarters as the Bharatiya Janata Party (BJP) did not field a candidate against her, where Congress, fielded Nikhil Kumaraswamy. It is interesting to note that her husband was a part of Congress.

“I received immense support from my people and I am grateful for that. I defeated my rival by 1.2 lakh votes in my debut election. I was disillusioned after my husband’s death, but this win has given me immense hope to carry my husband’s legacy forward.”

Though an independent candidate, Sumalatha expects support from the BJP government in the Centre in resolving the issues of her constituency. She also said that she would give her support to other parties based on Karnataka issues. “I will support the decisions that benefit the people of my constituency as well as Karnataka.”