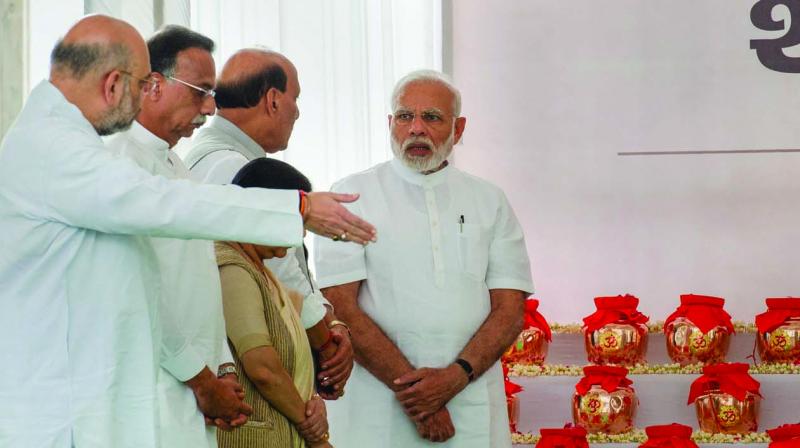 Prime Minister Narendra Modi pays tribute to the ashes of Atal Bihari Vajpayee, before their distribution to all BJP state presidents for immersion. (Photo: PTI)

New Delhi: The Bharatiya Janata Party (BJP) will organise ‘Asthi Kalash Yatra’ of Bharat Ratna awardee and former Prime Minister Atal Bihari Vajpayee, in all the states across the country, in an effort to strengthen the legacy of late BJP patriarch, who passed away last week.

“The life and message of Atal Ji will always motivate us to serve the people of India and create the India of Atal Ji’s dreams,” tweeted the Mr Modi.

Union home minister Rajnath Singh and External affairs minister Sushma Swaraj also joined Mr Modi and Mr Shah in handing over the urns at a ceremony at the party’s old headquarter, 11, Ashoka Road. The party had earlier said that ashes of the former Prime Minister will be immersed in over 100 rivers across the country following a procession in which people could offer tributes to Vajpayee. These yatras will pass through all district and blocks of states.

BJP governments across the country have already undertaken a number of measures to cement the legacy of the leader, whose popular appeal and affable manners won it support of the masses and also new allies.

Some states have announced memorials, while some like Chhattisgarh named a city after him. Maharashtra has decided to set up chairs in Vajpayee’s name in universities.

The late BJP patriarch had passed away on August 16 after a prolonged illness and the party organised a number of events, including a ceremony for immersing of his ashes in Har Ki Pauri in Haridwar on August 19.

Mr Shah along with the Union home minister, chief minister of Uttar Pradesh  Yogi Adityanath and his Uttarakhand counterpart Trivendra Singh Rawat and other senior leaders were present on the occasion.

An all-party prayer meeting was also organised on August 20, which was attended by leaders of all major political outfits.