Gowda said: ‘Without taking Siddaramaiah into confidence Sonia and Rahul said Kumaraswamy is next CM, it was their wrong decision.’ 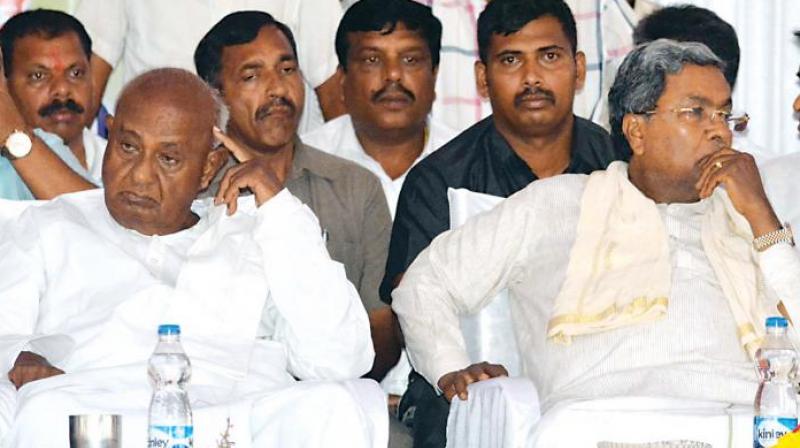 Continuing to target Siddaramaiah, the former prime minister termed the Congress high command decision wrong, a day after he had alleged that a few Congress friends wanted to unseat the coalition government as they could not see Kumaraswamy as Chief Minister. (Photo: File)

Continuing to target Siddaramaiah, the former prime minister termed the Congress high command decision wrong', a day after he had alleged that a few Congress friends wanted to unseat the coalition government as they could not see Kumaraswamy as Chief Minister.

"I have clearly said that without taking Siddaramaiah, who was Chief Minister for five years, into confidence Sonia Gandhi and Rahul Gandhi all of a sudden came and said Kumaraswamy is the next Chief Minister, it was their wrong decision," Gowda told reporters on Thursday.

He was referring to his interview to a newspaper in which he had held Siddaramiah responsible for the collapse of the government last month, but in remarks made on Wednesday did not name Siddaramaiah.

The coalition government collapsed on July 22 after the confidence motion moved Chief Minister H D Kumaraswamy was defeated in the Assembly, bringing to an end his 14-month long turbulent tenure marked by dissidence within the Congress.

Raising a banner of rebellion, sixteen MLAs (13 from the Congress and 3 JD(S)) had resigned as legislators which culminated in the fall of the coalition government.

Siddaramaiah had come under criticism after the government collapsed as most of the rebel Congress MLAs, including ST Somashekar, Byrati Basavaraj, MTB Nagaraj, Munirathna and K Sudhakar, were considered his loyalists.

However, rubbishing claims that he instigated those MLAs to resign and destabilise the government, Siddaramaiah had called the allegation as false made with malafide intention.

Congress and JD(S) considered as arch rivals, especially in old Mysuru region, had bitterly fought against each other during the 2018 Assembly polls, but joined hands after the elections threw up a hung verdict to keep BJP, the single largest party in the 225 member Assembly, out of power.

Since day one, the government was facing trouble from within as barring the top leaders of both parties, their rank and file did not accepted the alliance.

Reflecting strains in the JD(S)-Congress coalition government in Karnataka, Kumaraswamy had once said he was "not happy" being in the top post and was swallowing the pain like ''Vishakantha'' (Lord Shiva), who drank poison.

At one stage, many legislators and also Ministers from the Congress demanded that their legislature party chief Siddaramaiah be made the Chief Minister, prompting Kumaraswamy to even threatening to step down before the rebels took the decisive step of resigning as MLAs.

Following the collapse of the government, BJP under the leadership of BS Yediyurappa has assumed power on July 26 and proved its majority in the Assembly two days later.