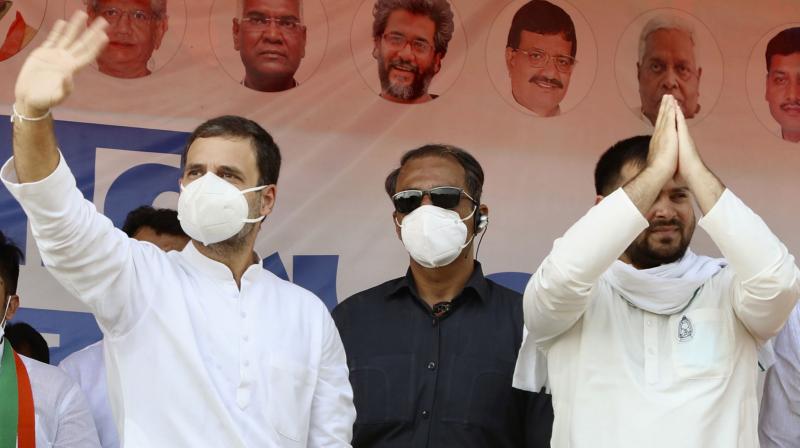 While addressing the masses in Hisua he attacked the NDA government at the Centre and Prime Minister Narendra Modi over the Galwan valley issue and said that “The Chinese army martyred 20 of our soldiers and took over 1200 kilometres of our land. When China came inside our territory then why our Prime Minister, insulting the heroes, said that no one came into our land. He is trying to mislead the people of Bihar by his statements which he should not do and speak about his plans to throw Chinese out of our territory”.

MGandhi’s statement came in reaction to Prime Minister Narendra Modi’s speech during his political rally in Sasaram, where he said that “brave soldiers from Bihar were martyred in Galwan to save the honour of our motherland and the tricolour”.

While addressing his political rally Rahul Gandhi also raised the issue of the migrant crisis and blamed the Centre for not extending any support to people who were being pushed out of other states during the lockdown.

Addressing his first rally in poll-bound Bihar, Gandhi said that “people of Bihar were promised two crore jobs during the previous assembly polls but no one got them”.

He also lashed out at the Centre for passing three farm laws. He said that “three farm laws are not god for farmers. First they put an end to Mandis and MSP in Bihar and now they are trying to do it in other parts of the country. This is an attack on the farmers”.

He was sharing the dais with RJD leader and grand alliance Chief Ministerial candidate Tejashwi Yadav during the rally.

The assembly elections in Bihar are to be held in three phases from October 28 onwards and results will be declared on November 10.