He also raised the Galawan valley clash, article 370 and Pulwama terrorist attack during the rally 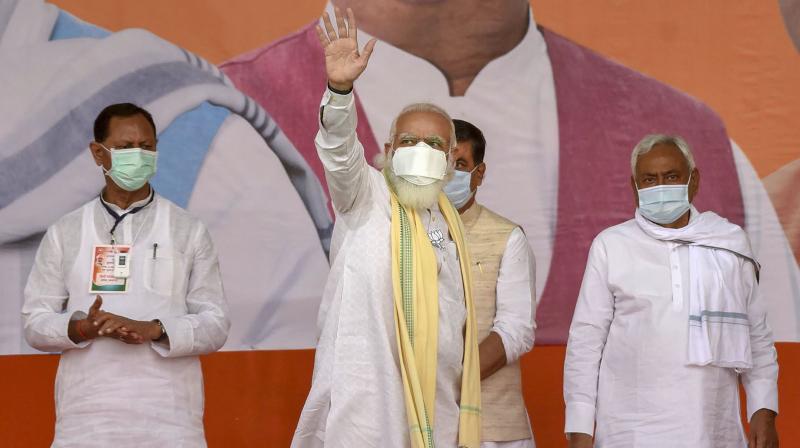 Prime Minister Narendra Modi while addressing his first public meeting ahead of assembly elections blamed the opposition coalition led by RJD and Congress for wasting 10 years of Nitish Kumar as Chief Minister when UPA was in power at the Centre.

Modi launched his campaign for the Bihar assembly elections by addressing rallies in Sasaram, Gaya and Bhagalpur on Friday. He is to address 12 public meetings all across the state ahead of Bihar polls.

In Sasaram he began his speech by paying tribute to veteran Dalit leader and LJP founder Ram Vilas Paswan and socialist leader Raghuvansh Prasad Singh who passed away recently due to prolonged illness.

Blaming the opposition parties for “creating hurdles” in the progress of Bihar, Modi said that “people have decided to stop all those who have the history of making Bihar a BIMARU state”.

The RJD led grand alliance has emerged as the main challenger to the JD(U)-BJP alliance in the state polls scheduled to begin in three phases from October 28.

While addressing the public meeting he referred to the previous UPA government at the centre and said that “they were so angry over being defeated by the NDA that they tried every possible way to sabotage the development of Bihar. I as Gujarat CM and Nitish Kumar from Bihar used to attend central meetings regularly and I used to see him requesting them not to stop the development of Bihar. They have wasted 10 years of Nitish Kumar as CM”.

During the occasion, he sought votes for another term of the NDA government in Bihar, saying that he had been working with Nitish Kumar only for the last three to four years and the state has progressed more during this period.

He also spoke of poor law and order scenario under the 15 years of RJD rule and said that the situation changed after the NDA government led by Nitish Kumar came to power in the state after 2005.

“The era of the lantern is over now and people are now using electricity everywhere in the state. I don’t have to remind you about the condition of Bihar before NDA led by Nitish Kumar came to power in Bihar. Earlier life would come to a standstill after sunset but today roads and electricity are there. People live without fear in the present time”, he said.

“The people who were once in power have greed in their eyes for Bihar which is now developing. People of the state must not forget the condition of Bihar when they were in power and how they pushed the state towards backwardness”. Prime Minister added.

He also raised the Galawan valley clash, article 370 and Pulwama terrorist attack during the rally. He said that “I bow my head at the feet of brave soldiers who were martyred in Galawan to save the honour of our motherland and the tricolour. In Pulwama also Bihar jawans were martyred”.

In his address, Prime Minister Modi slammed the opposition parties for demanding restoration of Article 370 in Jammu and Kashmir. He asserted that the country will not go back on its decision. He also lashed out at the opposition for protesting farm laws and blamed them for standing in support of "brokers and middlemen".

Exuding confidence that the NDA will return to power after the assembly elections he said that “Even before the elections are overall survey reports are saying that NDA will win and form the government in Bihar”.

While addressing a rally in Gaya, PM slammed the opposition coalition for standing in support of “Naxals”.