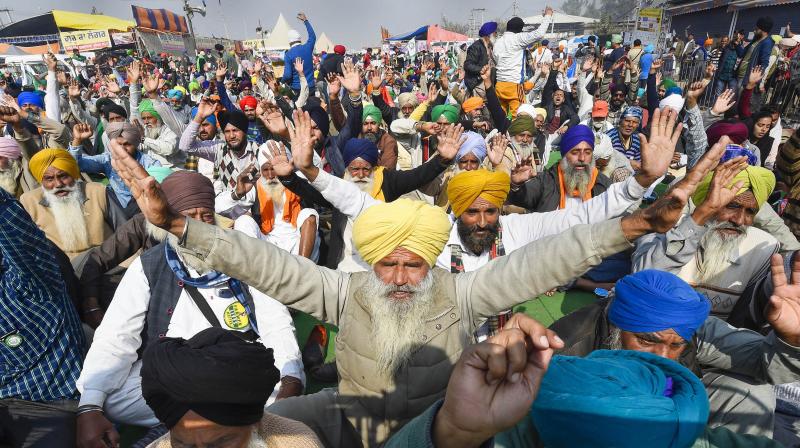 Kolkata: A section of agitating farmers, demanding the withdrawal of three controversial farm bills, have urged West Bengal chief minister Mamata Banerjee to join them after she again reached out to them on Wednesday with her support on the occasion of Kisan Diwas.

Sending five MPs of her party to the protest site at Singhu border near Delhi, the Trinamul Congress supremo also spoke to the farmers over the phone for the second time within three weeks in her bid to make the burning issue a poll plank against the BJP in the next year's Assembly Election in the state.

However, it is not clear whether Banerjee has responded to their plea to join them as she had earlier only pledged her "moral" support to the December 8 nationwide strike by several farmers' bodies against the bills.

Her party stated, "On Mamata Banerjee’s direction a five-member delegation comprising Derek O'Brien, Satabdi Roy, Prasun Banerjee, Pratima Mondal and Md Nadimul Haque on behalf of the All India Trinamool Congress, is meeting and interacting with farmers from who are on a relay hunger strike on the highway at the Singhu Border to show solidarity."

It further said that "Many farmers in small groups had an interaction on the telephone with Mamata Banerjee who assured them of her full solidarity with their movement. Some farmers also requested her to visit the dharna site. They shared their demand: the centre must repeal the farmer bills."

"It is unfortunate that farmers, who feed the entire country are being forced to go hungry. Fourteen years ago, Mamata Banerjee went on a historic 26-day hunger strike against the forceful acquisition of agricultural land, demanding justice for the farmers of Singur. Her stand was vindicated by the Supreme Court in 2016. Trinamool will stand by the farmers in solidarity, in this movement to repeal the anti-farmer bills. Today is *#KisanDiwas*," the TMC added.

Highlighting her government's welfare schemes for the farmers, Banerjee wrote on Facebook, "We observe December 23rd as Krishak Diwas or National Farmers’ Day to celebrate the active contribution of our farmer brothers and sisters to the country’s economy. It is the hard work of the farmers that lets the country sleep with its stomach full. We’re constantly striving to guarantee the well-being of the farmer community and we stand by our farmer brothers and sisters in their agitation against the Centre’s anti-farm Bills. I extend my greetings to each and every farmer of this country on this day!"