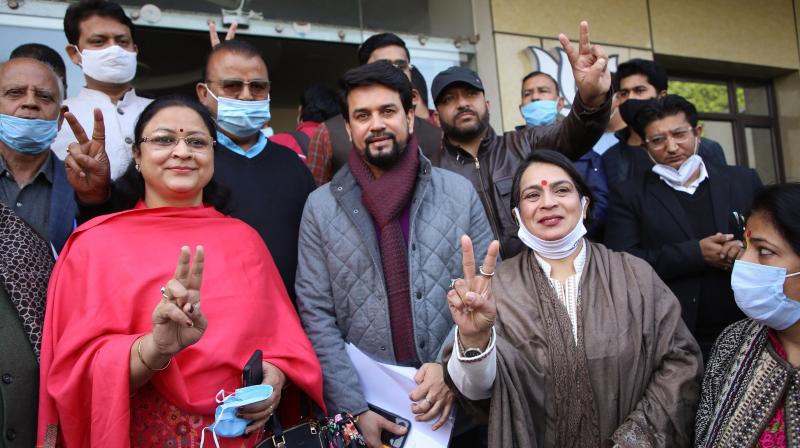 SRINAGAR: ‘People’s Alliance for Gupkar Declaration (PAGD)’, a conglomerate of Jammu and Kashmir’s half a dozen mainstream regional opposition parties and their allies from the national Left parties, has made it big in the Union Territory’s first-ever District Development Council (DDC) elections. Its tally stands at 110, out of the 278 results officially declared on Wednesday evening.

However, the PAGD’s arch rival Bharatiya Janata Party (BJP) has not only emerged as the single largest party by winning 75 seats, it is placed better in terms of overall vote share. On the other hand independents, many of them reportedly BJP’s proxies, have emerged as key players with a tally of 50 seats. The Congress bagged 26, the newly formed J&K Apni Party (JKAP) 12, J&K National Panthers Party (JKNPP) and People’s Democratic Front (PDF) two seats each and the Bahujan Samaj Party (BSP) one seat.

J&K’s State Election Commissioner, K.K. Sharma, said that at the end of “peaceful” counting for 278 of the 280 constituencies while the BJP has emerged as the single largest party after winning 75 seats, the independents “turned out to be the major reflection during these elections winning 18 percent of the total seats while registering their win on fifty seats”.

The counting remained suspended in two constituencies- Drugmulla in Kupwara district and Hajin-A in neighbouring Bandipore district- over the citizenship issue of two women candidates. The SEC said that the counting was “deferred” in these two segments “in view of a question that has arisen on eligibility of one each contesting candidates from the seats". He added, “A final decision in this regard will be taken after taking all aspects into consideration.”

Union Home Minister, Amit Shah, thanked people of J&K for voting BJP as the single largest party in the DDC  elections and said that the BJP under the leadership of Prime Minister, Narendra Modi, “will continue to work relentlessly towards the prosperity and development of the J&K region.” In a tweet, he also said, “Congratulations to the people of J&K for such great turnout in DDC polls. I applaud the efforts of our security forces & local administration for successfully conducting these multi-phased elections. This will further boost the morale and trust of people of J&K in democracy.” He assured that the Modi government “is doing everything possible to restore the grass root democracy in J&K” and that the maiden DDC polls were the testimony of the same.

This was the first democratic exercise in J&K after the Centre’s stripping the erstwhile state (including Ladakh) of its special status after abrogating Article 370 of the Constitution and splitting it up into two Union Territories-J&K and Ladakh- on August 5 last year.

PDP president and former chief minister Mehbooba Mufti claimed that the DDC elections results “have made it clear that people of J&K voted en masse for PAGD thus rejecting the unconstitutional decision to abrogate Article 370”. She added, “They have overwhelmingly supported the PAGD which stands for restoration of J&K’s special status”.

NC vice president Omar Abdullah had earlier said that the BJP had made this election a prestige issue about Article 370 and J&K’s special status “but the people have now spoken and it’s for those who believe in democracy to pay heed to these voices”.

However, Ms. Mufti in an interview said that while the results were “very encouraging” she won’t contest any election until J&K’s special status under Article 370 and its own constitution are restored. She and also Mr. Abdullah alleged that soon after the results were out the BJP’s “proxy” (an obvious reference to J&K Apni Party) with the help of the administration has resorted to coercive methods to bring in some independent winners under its fold. Mr. Abdullah tweeted, “The administration has now taken on the responsibility of trying to collect independent candidates for the BJP & it’s recently formed subsidiary. It seems the government doesn’t have enough to do & has branched out into this line of work as well”.

Ms. Mufti while referring to one such incident reported from southern Shopian district wrote on micro-blogging site Twitter “BJP & its proxies are sore losers & have resorted to abducting independents who won DDC elections. They are shamelessly using all means to increase their tally. This isn’t dance but death of democracy in J&K”.

Earlier in her diatribe against the BJP, she repeated the charge that the J&K administration and the police at the behest of the saffron party had created all kinds of hurdles for the PAGD and its nominees during these elections. She tweeted, “An election conducted in peace and with fairness is a victory for democracy. But the situation on the ground was far from ideal considering the odds against which the Gupkar Alliance fought the elections”.

Reacting to her assertions, BJP’s in-charge of DDC polls in J&K said, “It is important to know that independent candidates have polled more votes than the Congress and the PDP. The same Mehbooba Mufti who'd refused to unfurl the Tricolour has got a befitting reply today. The combined vote share of the Independent candidates and the BJP amounts to a little over 52 percent. This is a clear indication that the Gupkar Gang has lost its credibility and the trust of the people”.

The BJP went for aggressive campaigning bringing its several national leaders including union ministers and chief ministers to reach out to voters across the UT. Former minister and BJP leader Shahnawaz Hussain remained stationed in Kashmir throughout the campaigning period. Union minister for minority affairs, Mukhtar Abbas Naqvi, went door-to-door to caution people about the PAGD being a “conspiracy”, a conglomerate of “destructive dynastic politics” and “biggest impediment” in J&K’s development.