14 leaders from J&K, including Abdullah, have been invited to the meeting on Thursday to be chaired by PM Modi 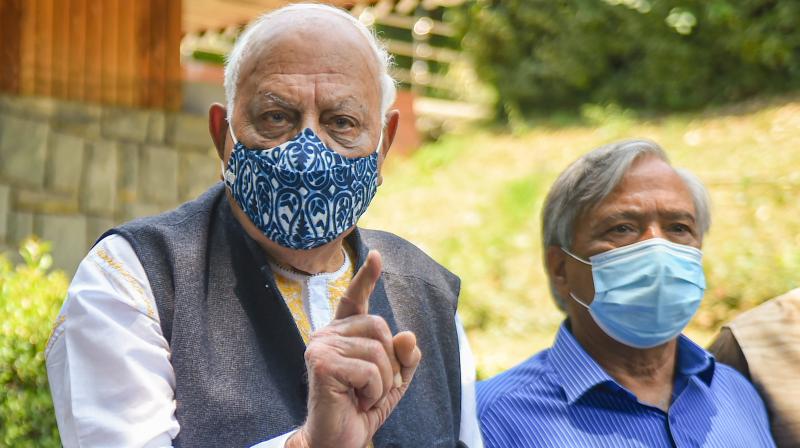 Srinagar: National Conference (NC) president Farooq Abdullah on Wednesday held consultations with his party leaders from Jammu over the Centre's invite to mainstream political parties in the union territory for talks.

The NC leaders from the Jammu region said they stand for a single Jammu and Kashmir by maintaining its unity and integrity and by respecting the wishes and aspirations of its people.

The delegation was led by NC's provincial president for Jammu Devender Singh Rana.

Speaking to reporters outside Abdullah's residence, Rana said, "Our only stand is a single J-K, to maintain its unity and integrity and respecting the wishes and aspirations of the people of J-K."

He said dialogue and inclusiveness is an important and vital essence of democracy.

"Any dialogue that can take us out of this morass and which will lead to the welfare of the state of J-K and its people, we are all for it," he said.

Fourteen leaders from Jammu and Kashmir, including Abdullah, have been invited to the meeting on Thursday to be chaired by Prime Minister Narendra Modi to discuss the future course of action for the union territory.

The meeting is the first such exercise since the Centre announced the abrogation of Jammu and Kashmir's special status under Article 370 of the Constitution and its bifurcation into union territories on August 5, 2019.

Rana said the party leaders from Jammu have reposed faith in Abdullah as he is not only the president of the NC but also the tallest leader of J-K.

Rana said as far as the pluralistic Jammu is concerned, it has its own aspirations and its own desires.

"We are for singular J-K, have always stood for the unity of J-K and equitable justice to all regions and sub-regions of J-K and we will always hold the aspirations of all the people of J-K as much as for Jammu, Kashmir and Ladakh, he said.

Asked if the leader from Jammu region want dialogue with Pakistan as was pitched by PDP president Mehbooba Mufti on Tuesday, Rana said he will not get into the intricacies.

"Abdullah is going for a dialogue, it is a dialogue with the PM of India and it is an inclusive dialogue and we are very hopeful that it will lead to the betterment of the state of J-K, peace, progress and prosperity of J-K.

Asked if they expected the PM's meeting will pave the way for holding Assembly elections in the Union Territory, Rana said everything is not about elections.

"Right now, we are at the crossroads of history in J-K and dialogue is the only way forward. There is no reason to sabotage the dialogue. We are going with an open mind. Abdullah is the tallest of the tall leaders of J-K...whether somebody likes it or not, he is the best person suited to represent J-K and represent the aspirations of Jammu, Kashmir and Ladakh, he said.

He added that the NC president has assured them that all three regions will be represented by him equitably and properly.

Rana also said the people want that the aspirations of Jammu and Kashmir as well as Ladakh should be respected.

Asked if he wanted the restoration of statehood with special status, he said, Who does not want the state and of course, our own identity, our job protections and land protections."