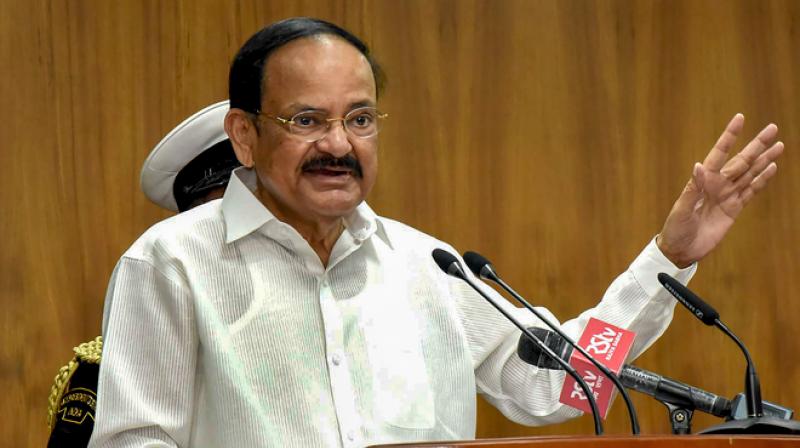 Bhosale had chanted “Jai Hind, Jai Maharashtra, Jai Bhavani, Jai Shivaji”. However Bhosale, who himself is the descendant of Shivaji Maharaj, said Naidu did not insult Shivaji Maharaj in any way.

“Naidu asked me not to add anything while taking the oath as the member. He said that chanting slogans while taking the oath is not in line with the Constitution. But some people have created a controversy out of it. Had (Shivaji) Maharaj been insulted, I am not the one to keep quiet. Naidu did no wrong. Had he done so, I would have sought his apology,” Mr Bhosale said while rejecting NCP and Shiv Sena’s claims.

Meanwhile, Naidu also clarified that he meant no disrespect to anyone. “Always been a strong and vocal admirer of Chhatrapati Shivaji Maharaj and worshipper of Goddess Bhawani. Reminded Members that as per conventional practice at the time of taking oath, no slogans are given. No disrespect at all,” he posted on his twitter handle.

However, Bhosale and Naidu’s clarifications did not stop Shiv Sena and NCP from holding protests against the Rajya Sabha chairman. While the members of Shiv Sena held protests in Aurangabad, the NCP’s youth wing said that it will send 20 lakh protest letters to Naidu seeking his apology.

The video of Bhosale’s oath was posted on social media by Congress leader Bhai Jagtap. In the video, Naidu is heard saying “no other slogans are allowed”.

“Though Naidu followed rules, the sentiments of people have been hurt. The BJP is keeping silence on the issue,” Raut said.

Reacting sharply to the Sena leader’s claims, Bhosale said, “These are the same people who had asked me to provide documentary evidence to prove that I am Shivaji Maharaj’s descendant. Now they are doing politics on the incident that did not take place.”

The NCP has an old axe to grind against Mr Bhosale, who was elected as the member of Lok Sabha on the Sharad Pawar-led party’s ticket in 2019 general election. However, within a few months he resigned from his Lok Sabha membership and joined the BJP. Though he was defeated by the NCP candidate Shrinivas Patil in the bypoll held for Satara seat in October 2019, the BJP has sent him to Rajya Sabha.