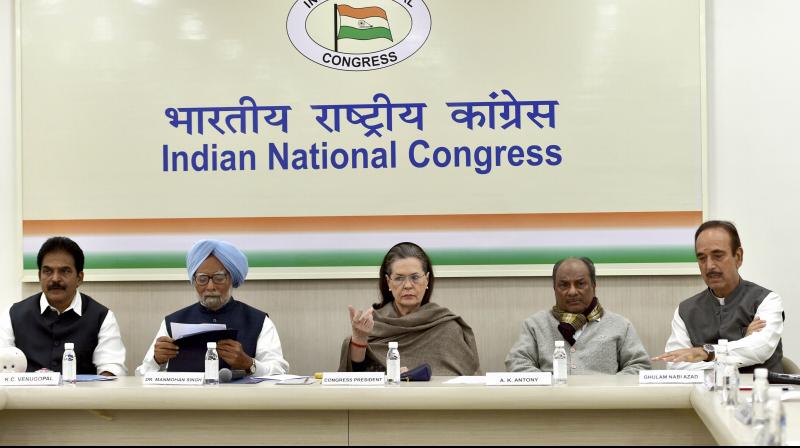 New Delhi:  A crucial meeting of the Congress Working Committee started here on Monday amid divisions in the party over the leadership issue and indications that Sonia Gandhi may offer to resign.

The party is divided on the leadership matter with a section demanding collective leadership and another reposing faith in the Gandhi family.

Top Congress leaders are expected to deliberate on the issue during the meeting of the party's top decision-making body that is being held virtually.

Sources said Sonia Gandhi may offer to resign at the meeting after around 20 leaders wrote to her demanding a full-time, visible president and overhauling of the organisational structure including elections to the CWC and reconstitution of the Parliamentary board.

After the start of the meeting with remarks by K C Venugopal, Sonia Gandhi will make her introductory remarks kicking off the deliberations.

Massive support poured for the Gandhis on Sunday after the "pro-reform" leaders went public, with Congress chief ministers leading the calls for Sonia Gandhi to stay until Rahul Gandhi takes charge.

Almost all Lok Sabha MPs of the party have written to Sonia Gandhi expressing solidarity and urging her to continue in her post or instal Rahul Gandhi.

Several state units including Delhi and Rajasthan passed resolutions favouring the leadership of Gandhis after a letter from a section of senior party leaders demanded sweeping reforms in the party, going to the extent of questioning the current CWC's ability to guide the party in the fight against the BJP.

Ironically, at least three of the dissenters are themselves part of the same CWC. These include Ghulam Nabi Azad, Anand Sharma and Mukul Wasnik.

Several party leaders, while supporting the continuation of Gandhis at the helm, accused those behind the letter of playing into the hands of the BJP and attempting to weaken the party at a time when there was a need to close ranks against the NDA government.

Haryana Congress chief Kumari Selja said, "we stand firmly behind Sonia Gandhi. This is the time to close ranks against the BJP and not the time to show cracks."

The dissenting leaders, meanwhile, also said that the party has failed to conduct an honest introspection of its losses in 2014 and 2019, adding that the uncertainty over leadership has demoralised workers.

This is the second challenge to Sonia Gandhi's leadership after the one in 1999 when the then leader of Opposition in Lok Sabha Sharad Pawar challenged her foreign origins in order to keep her from being named the party's prime ministerial face in the general elections that year.

Sonia Gandhi had resigned in the CWC, which rejected her move unanimously bringing her back as party president. While Sonia went on to become the longest serving Congress president, Pawar and rebels had to quit to form the NCP.