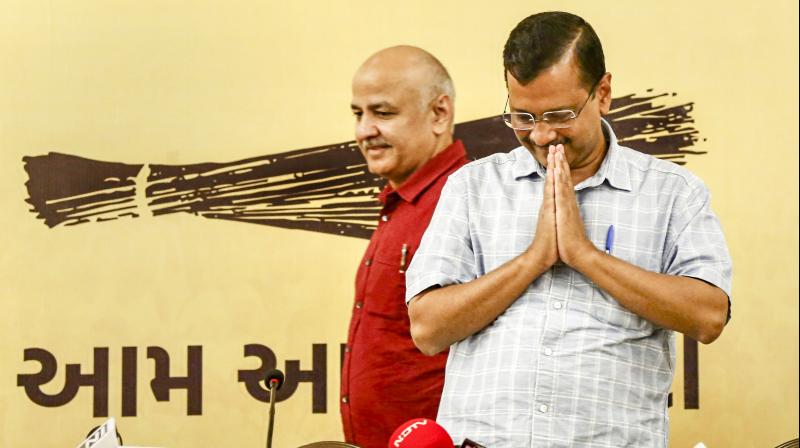 New Delhi: The Aam Aadmi Party on Tuesday claimed that the BJP had in 2014 offered its MLAs Rs 5 crores each to switch sides and join them. AAP spokesperson Saurabh Bharadwaj alleged the BJP had now reached out to deputy CM Manish Sisodia and offered to make him the chief minister if he leaves the AAP and joins them. “We will fail Operation Lotus in Delhi once again,” he added.

The BJP, meanwhile, hit out at the ruling party in Delhi over its now-scrapped excise policy. It claimed that the Delhi government had ignored the violations of the excise policy and recommendations of an expert committee. BJP MP Parvesh Sahib Singh Verma said an expert committee had advised against promotions to push liquor sales but the Delhi government offered a carton free for every carton sold.

Addressing a press conference, Mr Bhardwaj also alleged the BJP was still running “Operation Lotus” in Delhi and was “pulling every trick in the book” to topple the democratically elected government in Delhi. “This is their modus operandi. They began by targeting Sisodia, which is evident through the massive campaign against him for an alleged scam in building classrooms in government schools. Nothing came out of it and the BJP fell flat on their faces,” he said.

“Afterwards, the BJP threw allegations on him for some irregularities associated with the excise policy. The campaign ran for several months. Then, they threatened with CBI raids. Despite the CBI raids at Sisodia’s house, they could not find even an iota of evidence,” said Mr Bhardwaj.

Mr Bhardwaj then showed a video and said in this video it was clearly visible that the BJP leaders were contacting the AAP legislators and were offering a whopping amount of Rs 5 crores each.

Hitting hard at the BJP, AAP Rajya Sabha MP Sanjay Singh said the BJP seems to be under great distress ever since the AAP crushed their dreams and nullified their “Operation Lotus” in Delhi.

“The BJP thought their experiments with Shinde would reap benefits in Delhi too, but here they were met by the valour, courage and loyalty of Sisodia. This is why the whole of the BJP, starting from its top leadership, is repenting its actions today,” said Mr Singh.

AAP legislator from Kalkaji Atishi urged Prime Minister Narendra Modi to stop focusing on breaking parties and toppling governments. “I request the Prime Minister to think about the youth, women, and children of the country. They are hoping that you will give solutions to their problems and you are conspiring against other governments. You (Prime Minister) think that if you did not get the people’s mandate in any state, you should execute Operation Lotus and grab power,” said Atishi.

“I want to tell him (Prime Minister) that the country belongs to everyone. We are working tirelessly to provide excellent education, public healthcare, employment and installing CCTV cameras in the entire Delhi. You should call the chief minister and Deputy CM to ask them about the manner in which we have worked for the betterment of the lives of the people and that too while keeping the budget in profit so that it can be replicated in other states and the entire country,” she added.

The saffron party, meanwhile, said the AAP leaders had been patting each other on the back and digressing from the questions raised on the alleged malpractices.

MP Sudhanshu Trivedi said under the Delhi excise policy, producers, retailers and distributors of liquor cannot be the same. Also, there can’t be common directors or shareholders in different companies bidding for licenses.

On October 25, 2021, the Delhi excise department had brought some cases of common producers, retailers and distributors to the notice of the government, but it did not act on it, he claimed.

BJP MP Parvesh Sahib Singh Verma said the expert panel was against promotions to push liquor sales, but the Delhi government gave a carton free for every carton sold. The committee had suggested following the Karnataka model, where the government is responsible for wholesale business.  The panel said no individual can be given more than one licence. It also recommended against opening liquor vends in areas like villages and colonies without commercial markets. But the government ignored all these suggestions, he alleged.