Counting of votes halted for about 15 minutes as a clash broke out between AIADMK and Dhinakaran supporters at the counting centre. 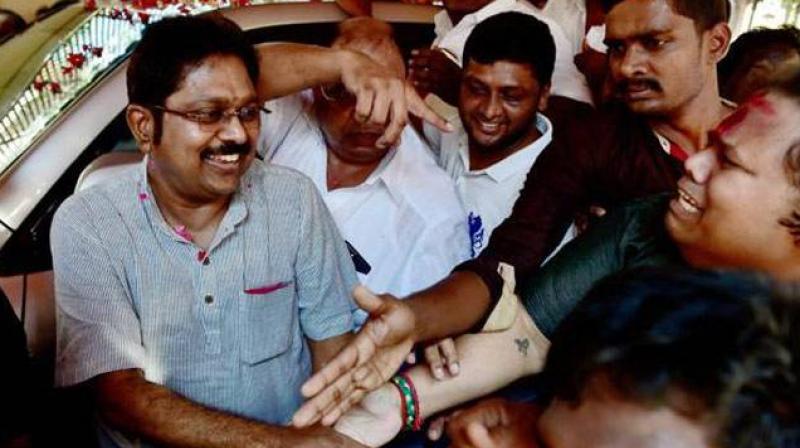 idelined AIADMK leader TTV Dhinakaran's margin further widened over that of his rivals by 8,000 plus votes at the end of third round of counting of votes. (Photo: PTI)

Chennai: Rival AIADMK leader TTV Dhinakaran on Sunday surged ahead with a significant lead against AIADMK and DMK candidates in the RK Nagar bypoll, and claimed victory from the prestigious segment represented by late Tamil Nadu chief minister J Jayalalithaa.

As soon as he registered a lead of about 20,000 votes against his AIADMK rival E Madusudhanan, Dhinakaran, contesting as an independent, visited the memorials of party stalwarts--the late M G Ramachandran (party founder) and Jayalalithaa--at the Marina Beach and paid floral tributes.

He also prostrated at Jayalalithaa's mausoleum.

A beaming Dhinakaran told reporters in Madurai, "We are the true AIADMK...people of RK Nagar have elected Amma's successor".

The surging leads show that people want change of regime, he said, taking a dig at the AIADMK government headed by Chief Minister K Palaniswami.

"During my recent visits to various parts of Tamil Nadu such as Avinashi (Tirupur) and Arumanai (Kanyakumari), people said the 'pressure cooker' (his poll symbol at RK Nagar) will win. They want a change of this regime," Dhinakaran said.

Claiming victory, the rebel leader said, "This is the best gift for the 1.5 crore party supporters" on the 30th death anniversary of party founder Ramachandran, fondly addressed as MGR.

On the AIADMK party symbol issue wherein the Election Commission awarded it to the Palaniswamy-led camp recently, Dhinakaran said only a candidate determines the symbol.

"We are the true AIADMK. A candidate determines the symbol. I have already said the 'two leaves' will be a success symbol only if it was with Puratchi Thalaivar (MGR) and Amma (Jayalalithaa). Will the people vote if it is handed over to M N Nambiar and P S Veerappa," he asked, amidst chuckles from his supporters.

Nambiar and Veerappa are famous yesteryear villains, with the former being cast against MGR in many of the matinee idol's films.

Dhinakaran said the Palaniswami government will "end in three months".

Dhinakaran later returned to Chennai and was given a rousing reception at the airport by his supporters, even as scores of well-wishers thronged his Adyar residence.

Jubilant supporters celebrated by distributing sweets and bursting crackers, while exuding confidence that their leader would triumph with a thumping margin.

Earlier, counting of votes suffered a temporary disruption following an alleged altercation between supporters of Dhinakaran and Madhusudhanan.

A senior electoral official said the "altercation caused disruption," even as the two sides charged each other with roughing up counting agents.

Another official said the police restored peace and that the second round of counting was on.

"Police restored peace, Nothing alarming. Compilation of the second round going on," he said.

The counting of votes is on progress at a women's college amid tight security.