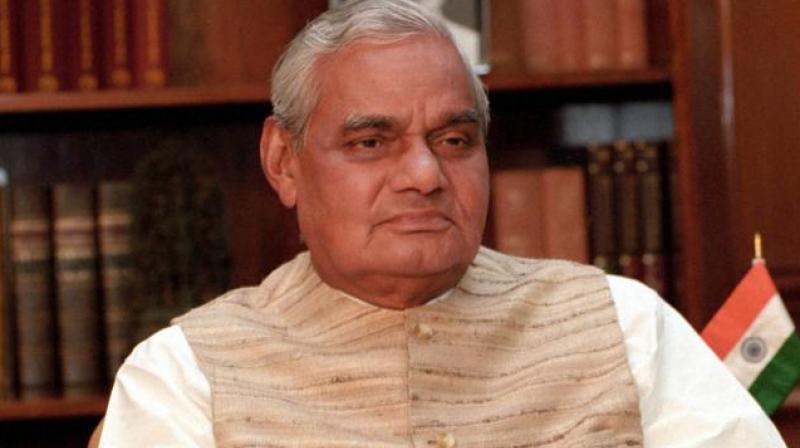 ‘Atalji's thoughts and vision are source of inspiration to people of country. An initiative was taken to enable people to pay their respects to the great soul,’ an official of Atal Smriti Nyas Society said. (Photo: PTI)

New Delhi: A memorial of former Prime Minister Atal Bihari Vajpayee will be dedicated to the nation on his birth anniversary on Tuesday at Rashtriya Smriti Sthal here.

President Ram Nath Kovind, Prime Minister Narendra Modi and other eminent personalities will attend a prayer meeting at the memorial near Rajghat, according to the 'Atal Smriti Nyas Society', which has developed the memorial-- Sadaiv Atal.

An official said a vacant piece of land was made available for the memorial at Rashtriya Smriti Sthal by the Union Housing and Urban Affairs Ministry. It was constructed by the Centre Public Works Department (CPWD) at a cost of Rs 10.51 crore. The project was funded by the Atal Smriti Nyas Society, he said.

"Atalji's thoughts and vision are a source of inspiration to the people of the country. To enable people to pay their respects to the great soul, an initiative to develop his samadhi was taken up by the society," the official said.

Senior BJP leader and society president Vijay Kumar Malhotra told PTI that the memorial is spread over 1.5 acres of land at Rashtriya Smriti Sthal, where Vajpayee was cremated on August 17.

He said the memorial reflects the former prime minister's personality as a poet, humanist, statesman and a great leader. It is enclosed by nine bas-relief walls which have inscriptions of the poetry of Vajpayee, he added.

Malhotra said not a single tree was cut down in developing 'Sadaiv Atal' at Rashtriya Smriti Sthal, which also houses samadhis (memorials) of former presidents, prime ministers among others.

Vajpayee had passed away at AIIMS after prolonged illness on August 16. He was cremated on August 17 with full state honours.