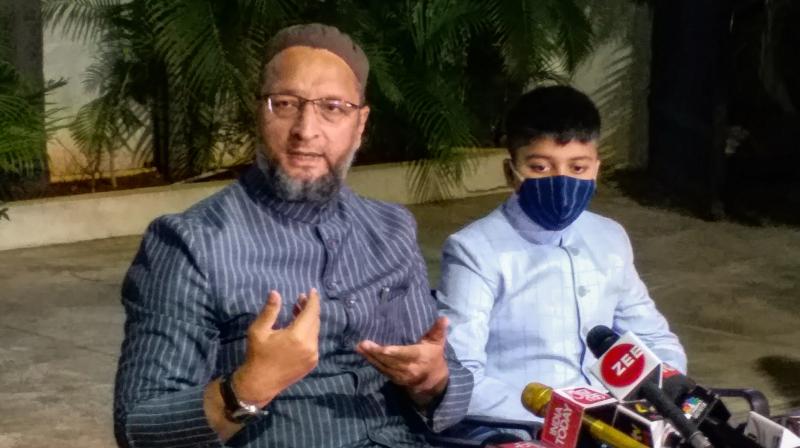 Hyderabad: AIMIM president Asaduddin Owaisi on Wednesday said that the National Population Register (NPR) is the first step towards National Register of Citizens (NRC) and would put them at risk of being marked as “doubtful citizens”.

“NPR is the 1st step of NRC. It will force Indians to prove their citizenship & put them at risk of being marked as “doubtful citizens”. NRC+CAA will mean that Indian Muslims are reduced to second class citizenship. Go ahead with Census, there’s no need for NPR,” tweeted Owaisi.

He was reacting to a report which claimed that the Registrar General of India, an agency that undertakes decennial population count in the country, has written to all states requesting them to update the ‘Charge Register’, a Census document which helps enumerators to collect details during the first phase of the census-household survey.

The first phase of the 16th Census of India, which was scheduled to be rolled out in a few states on April 1 2021, has not been finalised due to the Covid-19 pandemic. In the first phase, house listing will be conducted, while in the second, the enumeration of population would be done.

The AIMIM, which has been opposing the CAA, NRC and NPR, believes that the Charge Register would help in updating the National Population Register, which could be used to mark some Indians as doubtful citizens. Later, it suspects, the government will bring in the National Register of Citizens (NRC), which requires people to prove their citizenship.

Though Union home minister Amit Shah on Sunday hinted at a delay in implementing the Citizenship Amendment Act (CAA) and the much-talked-about nation-wide NRC because of Covid-19 pandemic, the Registrar General of India’s communication led to doubts and apprehensions among many citizens.

The ruling Telangana Rashtra Samiti has also reiterated its opposition to the CAA, NPR and NRC. “It doesn’t matter whether the circular is related to NPR or only confined to Census 2021. The TRS will stick on its stand to oppose the CAA, NPR and NRC,” TRS politburo member and former MP B. Vinod Kumar told Deccan Chronicle.

He recalled that the TRS had opposed the CAA and NRC in Parliament and the Telangana Assembly had passed a unanimous resolution in March this year opposing the CAA, NPR and NRC.

He also recalled the statement of Chief Minister K. Chandrashekar Rao which he made on the floor of the House on March 16 opposing the contentious laws.

Congress Legislature Party leader Mallu Bhatti Vikramarka, too, said that his party would continue to oppose the CAA, NRC and NPR as it did in Parliament and the Assembly. He said the Congress will fight against the divisive acts of the BJP by building a people’s movement.