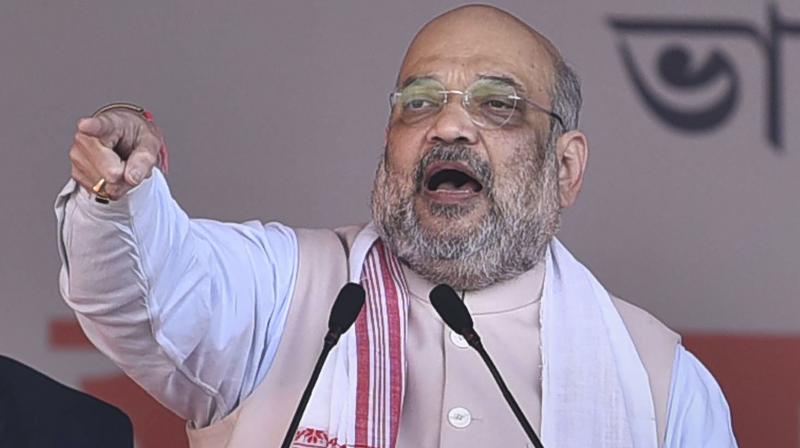 Addressing a public meeting to commemorate the completion of one year of the Bodo Accord, Shah asked the people to elect a BJP government in Assam for speedy development of the Bodoland Territorial Region (BTR). (Photo:PTI)

Assam is among the five states in the country slated to have elections in 2021. The other states and Union Territories are Kerala, Tamil Nadu, West Bengal and Puducherry.

Shah, who addressed another public rally at Nalbari, said, "I have seen many rallies in my life, but I am so happy to see today's rally... Development will be placed in Bodoland through this BTR Accord. More than 5,000 people lost their lives, I assure you that the BTR will become a more developed region in Assam in coming days.”

“Prime Minister Narendra Modi initiated the process to end insurgency in the Northeast by signing the Bodo Peace Accord. Efforts were made for settlement for the Bru-Reang issue and 700 members of 8 armed groups laid down arms,” he said.

“I am here to assure people of BTR that the Government of India, under the leadership of Prime Minister Narendra Modi, will implement all BTR Accord clauses. Today, the insurgency era has ended and the peace era has started,” he said.

Expressing satisfaction over the peaceful elections in Bodoland area, Shah said, "Please identify those instigating disputes in the name of Assamese and non-Assamese, Bodo and non-Bodo. They are not doing it for our development but are playing politics. It is high time that people of Assam teach a lesson to such people... This rally is a reply to those who disturbed the peace in Assam by spreading venom in the name of Bodo and non-Bodo. Today, Bodos and non-Bodos both are present here."

Shah also came down heavily on the Congress, saying, “Congress had signed many accords, but they didn't implement any. But PM Modi has implemented it within time, what he had committed... Peace has come in Jammu and Kashmir after the abrogation of Article 370 of the Constitution... Now, BJP will protect the language, culture of Assam. Bloodshed was happening during the Congress regime.” He also assured BTR chief Pramod Boro that his government would stand like a rock with him.

The BTR Accord was signed between the Central government, the Assam government and the Bodo stakeholders — NDFB and its factions — to ensure the territorial and cultural integrity of the region on January 27, 2020. Recently, the BJP, United People's Party Liberal (UPPL) and Gana Suraksha Party (GSP) also formed the Bodoland Territorial Council (BTC).

Earlier on Saturday, Shah while addressing the 69th plenary meeting of the North Eastern Council (NEC), urged all the states in the region to solve their boundary disputes by August 15, 2022, when the country will be celebrating 75 years of its Independence.

The Union home minister said that when India and Bangladesh can resolve their border issues, why can’t the northeastern states do so despite being part of the same country.