‘No loan waived off for any businessman, Rahul is lying’: Amit Shah

As the Karnataka assembly election comes nearer, the BJP and Congress have begun aggressive campaigning in the state. 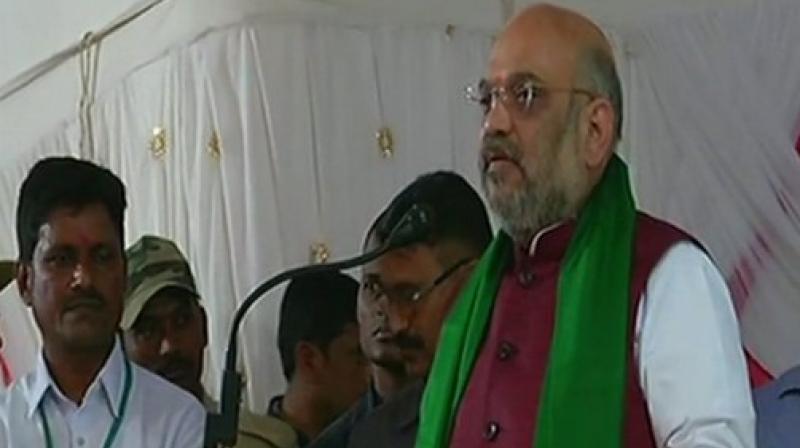 The BJP chief also assured the farmer that the defunct sugar mill in Bidar would be started again, once the BJP government comes in the state. (Photo: ANI)

"Congress leaders keep making statements that the BJP government has waived industrial loans of thousand crores and lakh crores. I would like to make it very clear that after Modi government came, not even one businessman's one paisa of loan has been waived. Rahul Gandhi is not saying correctly," Shah said at an interactive public meet with the farmers of Karnataka.

Hitting back at Gandhi's statement, Shah also challenged Gandhi to furnish relevant record that can attest to his allegations, and added, "I am ready to answer, and apologise to the farmers of Karnataka."

Also read: Rahul attacks Modi, asks him to practice what he preaches

Gandhi has held the Narendra Modi-led government responsible for the frauds, and for the inefficiency of the authorities to nab the culprits.

Shah further elaborated on the steps taken by the BJP government for the benefit of sugarcane farmers, ranging from the stopping of raw sugar imports to the imposition of 40 percent duty on raw sugar brought for industrial purpose.

The Centre also made it compulsory that at least 10 percent of ethanol -the byproduct of sugarcane- was mixed with petrol, and increased the price of ethanol from Rs 11 up to Rs 48, Shah informed.

The BJP chief also assured the farmer that the defunct sugar mill in Bidar would be started again, once the BJP government comes in the state.

As the Karnataka assembly election comes nearer, the BJP and Congress have begun aggressive campaigning in the state.

Earlier in the day, Congress President Rahul Gandhi, who is on a three-day-visit in the state, addressed a public meet.