Votes will be counted on February 28 and results will be declared the same day. 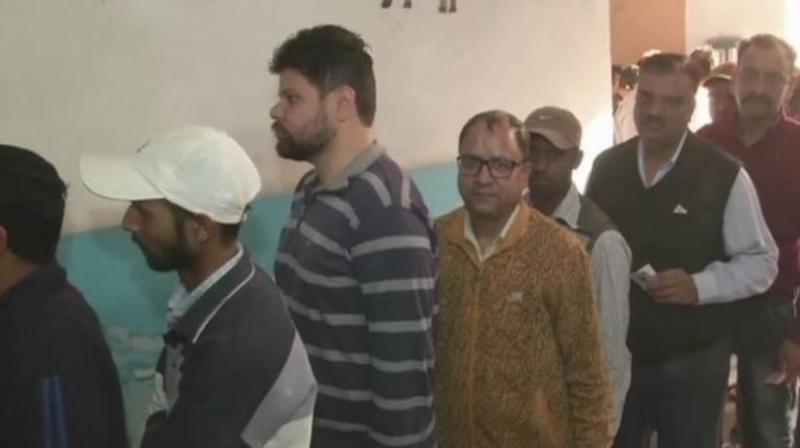 The EVM at Kolaras' booth number 57 were not working in the morning and people were waiting outside the booth since morning to cast their votes. (Photo: ANI)

New Delhi: Byelections to two Assembly seats in Madhya Pradesh, Mungaoli and Kolaras, which went to polls on Saturday, gave a glimpse of the battle royale that awaits the BJP and the Congress.

With an estimated 70-77 per cent polling recorded in the two Assembly segments, the outcome will decide many fates and set the tone for the Assembly elections in the state due later this year. Votes will be counted on February 28 and results will be declared the same day.

Mungaoli and Kolaras Assembly seats, in Congress leader Jyotiraditya Scindia’s Guna Lok Sabha constituency, had fallen vacant due to the death of sitting MLAs, both from the Congress.

Both the BJP and the Congress have been battling it out. For Mr Scindia it was a prestige battle, and for BJP chief minister Shivraj Chouhan, an opportunity to test the waters and to challenge the Congress leader in his bastion.

Kartikeya, the son of chief minister Chouhan, made his politically debut by campaigning in the bypolls.

The results of these bypolls will set the mood for Assembly elections in Madhya Pradesh. A BJP defeat could give a handle to Mr Chouhan’s detractors within the party to demand his replacement on grounds of anti-incumbency, and if the Congress fails to win, it will be a setback for Mr Scindhia who is trying to set the faction-ridden state Congress unit in order.

Mr Chouhan, keen to snatch the two seats from the Congress, had recently announced several measures for the people of the region, including Rs 1,000 monthly assistance to tackle malnutrition among Saharia tribals, who form a major chunk of the population in Kolaras and Mungaoli.

During the campaigning phase, the Congress had made several complaints to the Election Commission of India alleging violation of the Model Code of Conduct by the BJP. The poll body said that the chief minister violated model code of conduct by “announcing” the construction of a bridge.