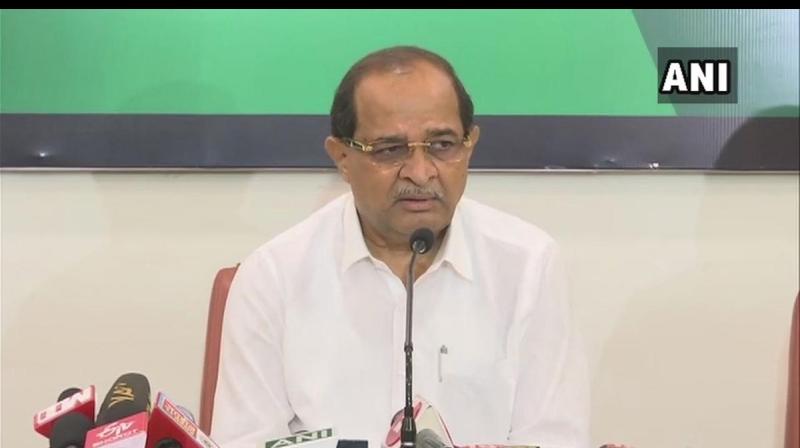 Senior Maharashtra Congress leader Radhakrishna Vikhe Patil, whose son joined the BJP last month, has resigned as the Leader of Opposition in the state Assembly, the party said on Thursday. (Photo: File)

Mumbai: Senior Maharashtra Congress leader Radhakrishna Vikhe Patil, whose son joined the BJP last month, has resigned as the Leader of Opposition in the state Assembly, the party said on Thursday.

Vikhe Patil had sent his resignation letter to the top party leadership, offering to quit the post of LoP, after his son Sujay Vikhe Patil left Congress and joined the BJP.

The development comes a day before Rahul Gandhi's rally in Maharashtra's Ahmednagar on Friday. Chavan was in Shirdi on Thursday ahead of Gandhi's rally at Sangamner in the Shirdi Lok Sabha constituency.

Vikhe Patil was accused of giving tacit support to his son Sujay, who was the BJP contestant from Ahmednagar Lok Sabha seat and was blamed for working behind the scenes in his campaign.

Party sources said he was in touch with the supporters of his father late Balasaheb Vikhe Patil in Rahuri, Parner and other areas in Ahmednagar district, and exhorted them to support Sujay.

NCP chief Sharad Pawar, who has been a traditional opponent of the Vikhe Patils, had made the Ahmednagar contest a prestige battle. Pawar had refused to vacate the constituency, which is with the NCP as per the seat-sharing deal with the Cngress, for Sujay who eventually joined the BJP and contested the seat.

Ahmednagar, about 120 km from Pune, is considered to be the stronghold of the Vikhe Patil family and Sujay chose to contest from it, notwithstanding protests from supporters of BJPs sitting MP, Dilip Gandhi.

The monsoon session of Maharashtra Legislature will commence in July and will be the last session before the state goes to polls later this year.