The enthusiasm among ground level party workers in Madhya Pradesh was beautifully exhibited in this bet between BJP and Congress workers. 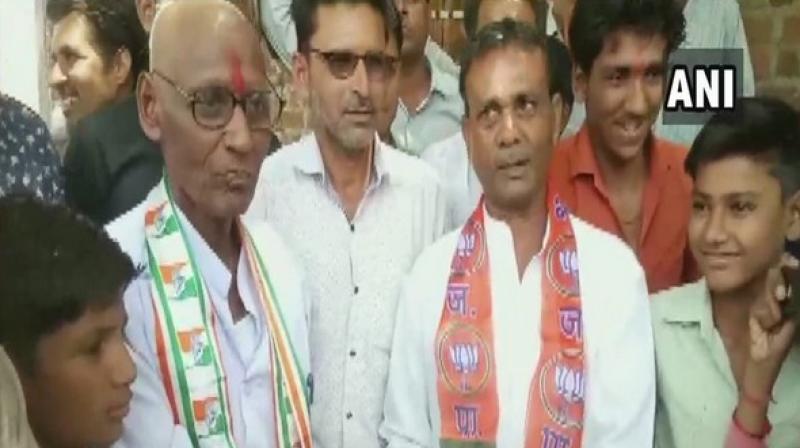 Sen, who shaved his head in front of the people of Harana village in Rajgarh, attributed this defeat to party's unfulfilled promise of loan waivers to the farmers. (Photo: ANI)

Rajgarh: A Congress party worker here shaved his head on Saturday after losing a bet to a BJP worker over who will become the next Prime Minister.

Bapu Lal Sen, Congress worker, Raigarh who lost the bet said: "We had a bet that if Modi became the PM, I'll shave my head and if Rahul Gandhi became the PM, BJP worker Ram Babu Mandloi will shave his. I have shaved my head now that my party has lost."

The enthusiasm among the ground level party workers in Madhya Pradesh was beautifully exhibited in this bet between the BJP and Congress workers. BL Sen, while keeping up with the fervour, kept his promise and shaved his head after Congress could not gain majority seats in the general elections.

Sen, who shaved his head in front of the people of Harana village in Rajgarh, attributed this defeat to party's unfulfilled promise of loan waivers to the farmers.

"There is a lot of rage among the farmers of MP as the loan waiver was not looked after at the right time. Rahul should have invested 3 months instead of just 10 days for the cause of farmer loan wavier," he said.

The enthusiasm seen among the party workers of Rajgarh is not new. An incident similar to this took place when a Congress party worker, Indu Singh, adopted silence for a year after the assassination of Indira Gandhi.

Narendra Modi is set to swear in for the second term after Modi-led NDA swept the elections and won 352 out of 542 seats in the 17th Lok Sabha elections. With the official count in the Lok Sabha elections which got over on Friday, the BJP has secured 303 seats, 22 more than in the 2014 elections.