Sparks fly as Congress, BJP spar in motion of thanks debate

Home minister Amit Shah too was present in the House during the discussion. 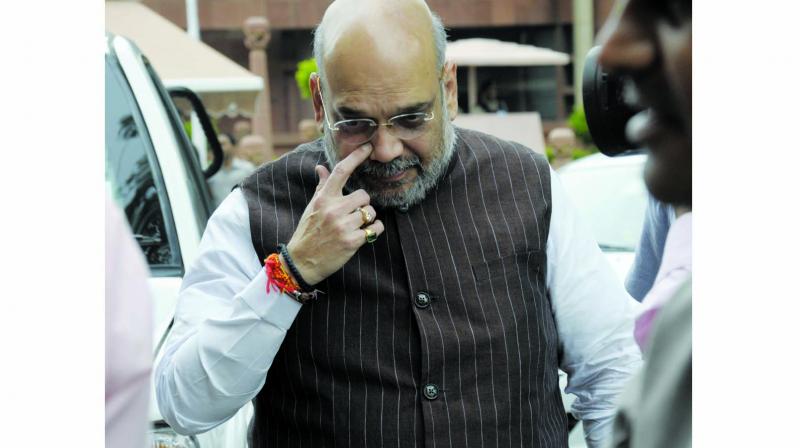 New Delhi: Vitriolic barbs and below the belt remarks flew thick and fast as BJP and Opposition members exchanged accusations during the discussion on President’s address in both Houses of Parliament.

At one stage, the verbal duel got so bitter that the Congress called Prime Minister Narendra Modi a “very big salesman” and the party’s leader in Lok Sabha Adhir Ranjan Choudhury made a “naali” (drain) remark against Mr Modi, forcing Speaker Om Birla to expunge it. Later, Mr Choudhury clarified that his intention was not to insult the Prime Minister and he regrets if Mr Modi was hurt by his comment.

The Congress MP from Bengal said he made the “naali” comment in response to some BJP leaders’ comparison of Mr Modi with Swami Vivekananda which provoked and angered him.

Congress leader Sonia Gandhi was earlier seen prompting Mr Chowdhury while he was attacking the BJP. The debate in the Lok Sabha on the “Motion of Thanks” was initiated by Union minister Pratap Sarangi who sang paeans of the Prime Minister and asked rivals to respect people’s mandate, drawing jeers from the Opposition benches.

Home minister Amit Shah too was present in the House during the discussion. In the Rajya Sabha, as the BJP reiterated Mr Modi’s mission of a “New India”, and asserted that the government wants not just “Sabka Saath, Sabka Vikas” (development and
cooperation of all) but also “Sabka Vishwas” (everybody’s trust), the Congress asked the government to keep its “New India” to itself and return the “old India” where “there was a culture of love”, “there was no lynching and no hatred” and where “Hindu and Muslims used to feel the pain of each other”.

Mr Sarangi, a first-time MP from Odisha, who was delivering his maiden speech, said that criticising Mr Modi is like hitting one’s head against the Himalayas.

He asked Mr Modi’s rivals to respect the people’s mandate and chided the Congress for calling Mr Modi a “very big salesman”.

The debutant MP from Odisha wondered if those who do not believe in “Vande Mataram” slogan have any right to live in India and asserted that the “tukde-tukde” gang (referring to divisive forces) will not be tolerated in the country. While speaking on the motion, Congress’ leader Mr Choudhury launched no-holds barred attack on the government and ended up making the “naali” comment.

His “naali” comment prompted many in treasury benches to refer to “India is Indira and Indira is India” comment made by the then Congress president Indira Gandhi when she was the Prime Minister.

“Our Prime Minister is a very big salesman. We (Congress) have been unable to sell our product, that is why we lost (Lok Sabha elections),” he said.

Incidentally Mr Modi was present in the lower house when the discussion started and remained seated even when Mr Choudhury was speaking. The Modi government is “compliment-addicted” and driven by manipulation, Mr Chowdhury said and then went on to use a derogatory term for Mr Modi.

The Congress leader said the BJP returned to power as Mr Modi was a “very big salesman” and a “better salesman” while the Congress failed to market its products.

Hitting back at the BJP after Mr Sarangi referred to alleged scams in the sale of 2G spectrum and coal block allocations, the Congress leader said if there was a wrongdoing why are UPA chairperson Sonia Gandhi and Congress president Rahul Gandhi not in jail.