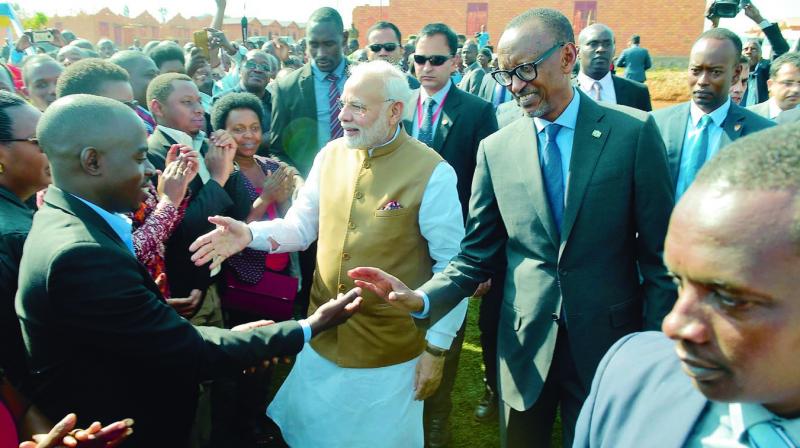 New Delhi: People in India too would be pleasantly surprised to see the cow being given such importance as a means of economic empowerment in villages  in faraway Rwanda, PM Narendra Modi said on Tuesday during his visit to Rwanda even as he gifted “200 high-breed dairy cows” to villagers there who do not yet own a cow, under the Rwandan Government’s Girinka Programme. The gesture is being seen as “cow diplomacy” of sorts by India which is expected to win the goodwill of some of the poorest Rwandans. The function to mark the handing over of cows was held at Rweru Model village, in the presence of Rwandan President Paul Kagame. The cows were bought in Rwanda itself and gifted.

Meanwhile, the ministry of external affairs (MEA) announced that “eight bilateral MoUs on various fields were signed during the Prime Minister’s visit to Rwanda and that “agreements in the area of trade, defence, dairy-cooperation, agriculture, culture, leather and allied sector and Line of Credit for $ 200 million for expansion of Special Economic Zone and Irrigation Scheme was signed. According to the MEA, PM Modi “appreciated the effective utilisation of US $400 million Lines of Credit extended to Rwanda in the last few years”. The government said, “Prime Minister Narendra Modi today gifted 200 cows to villagers who do not yet own a cow, under the Rwandan Government’s Girinka Programme. ... He said people in India too would be pleasantly surprised to see the cow being given such importance as a means of economic empowerment in villages, in faraway Rwanda.”

The word “Girinka” can be translated as “may you have a cow.” and describes a centuries-old cultural practice in Rwanda whereby a cow was given by one person to another, as a sign of respect and gratitude, Government officials said. The Girinka scheme was initiated by President Paul Kagame in response to the alarmingly high rate of childhood malnutrition and as a way to accelerate poverty reduction and integrate livestock and crop farming.