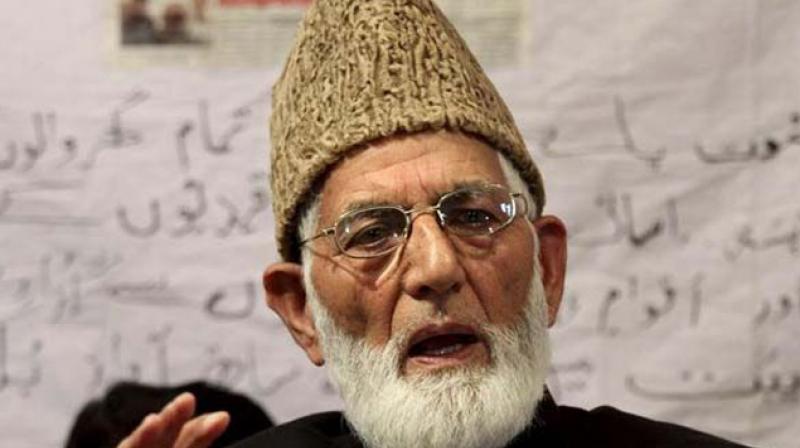 Kashmiri separatist patriarch Syed Ali Shah Geelani's family on Monday said that all the statements attributed to him in the recent past are false and fabricated.

It also requested media and social media users not to drag the ailing leader or his kin into “unnecessary controversies” but give them some breathing space and allow them to attend to his medical needs.

The statement signed by his sons Nayeem Geelani and Naseem Geelani and son-in-law Zahoor-ul-Haq Geelani said that Mr. Geelani is in advanced age and suffering from multiple ailments and, therefore, needs round-the-clock medical as well as personal attention. “He has throughout his life faced hardships, both physical and mental, for his beliefs and conviction,” the statement asserted adding that his health condition has “stressed” his family members and supporters.

The statement while making an appeal for giving the 91-year-old leader “some amount of relaxation” and his family a space to attend on him in a better way “at this critical juncture” said that circulation of  “repeated and fabricated letters in his name and posts, comments and imaginary stories” through sections of media and social media platforms is “disturbing him and affecting his health very badly”.

The statement further said, “The health condition of the Quaid (leader) demands the family to be careful, focused and attentive, more so amid the pandemic. The prime responsibility of his close family is to attend to him. We will keep the people updated regarding his health and his (Pakistan based) representative Abdullah Gilani will respond and react to political issues (on his behalf)”.

Last week, reports appearing in a section of media had said that Mr. Geelani has rejected Pakistan's highest civilian award ‘Nishan-e-Pakistan’ conferred on him on August 14, the neighbouring country’s Independence Day. ‘Nishan-e-Pakistan’ is awarded to citizens of Pakistan for highest degree of service and to foreign nationals as well.

The statement issued by Mr. Geelani’s family, however, said “Past few months have been very hard for all of us. On one hand, we are busy dealing with his health condition and have been consumed physically as well as mentally and, on the other hand, continuously dragging the family into his political affairs has taken a heavy toll on our personal as well as domestic life”. It added, “It is unfortunate that people with vested interests have launched a vicious campaign to malign the stature of the Quaid. Repeated and fabricated letters in his name, posts, comments and imaginary stories are disturbing him and affecting his health very badly. The unnecessary social media campaigns and hounding of the family only adds to our already stressful life”.

It urged the media fraternity and others “not to circulate any information about his health, and similarly, any communication of political nature on his behalf without his representative’s authentication”. It added, “We humbly request and appeal people to pray for speedy recovery and long life of the Quaid.”