BJP seals Haryana deal with JJP; Khattar to be CM, Chautala to be Dy CM

M L Khattar along with elected MLAs will meet the Governor tomorrow to stake the claim to form government. 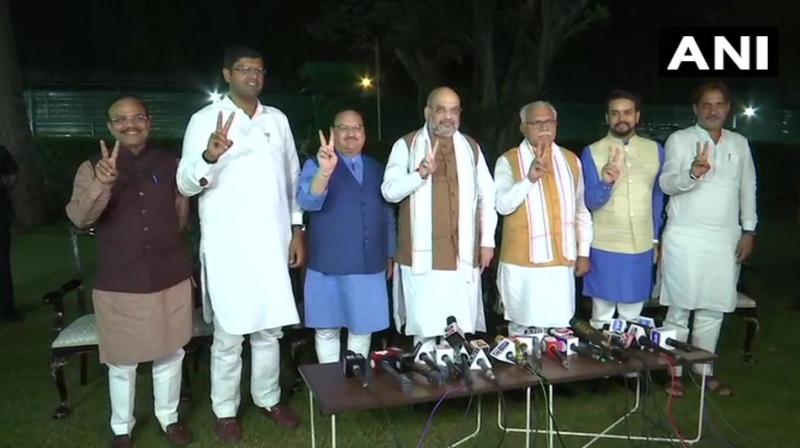 As declared on Thursday, Manohar Lal Khattar will be sworn-in as the chief minister and Chautala will be given the post of deputy chief minister.

"Keeping in mind the mandate of the people, leaders of BJP and JJP have decided that the two parties will form a government in Haryana together. The Chief Minister will be from the BJP and the deputy chief minister will be from JJP," Amit Shah announced at a news briefing flanked by Haryana Chief Minister Manohar Lal Kahttar and Dushyant Chautala.

The announcement came at the end of a meeting at Shah's residence between the two sides where the agreement was finally reached.

Haryana's ruling BJP, which emerged as the largest party and needed six MLAs for a majority, had been focusing on its pursuit of eight independent MLAs, among them the highly controversial Gopal Kanda, NDTV reported.

But facing a backlash over Kanda, who has a criminal record and is accused of abetting the suicide in 2012 of a woman who worked for his aviation company, the BJP was believed to be considering a tie-up with Dushyant Chautala whose JJP won 10 seats.

The Congress too had reportedly reached out to the 31-year-old as the votes were being counted and the party seemed to be doing much better than its expectations.

But as the Congress ended up with 31 of Haryana's 90 seats, it was clear that just the JJP's support will not be enough for the Congress to form government.

The BJP was attacked by not just the Congress but also its own party leader Uma Bharti over reports involving Gopal Kanda who had pledged his unconditional support to the BJP saying all independent MLAs would back it.