This indicates that the Sena workers want him to take the top job even though Uddhav Thackeray ruled it out. 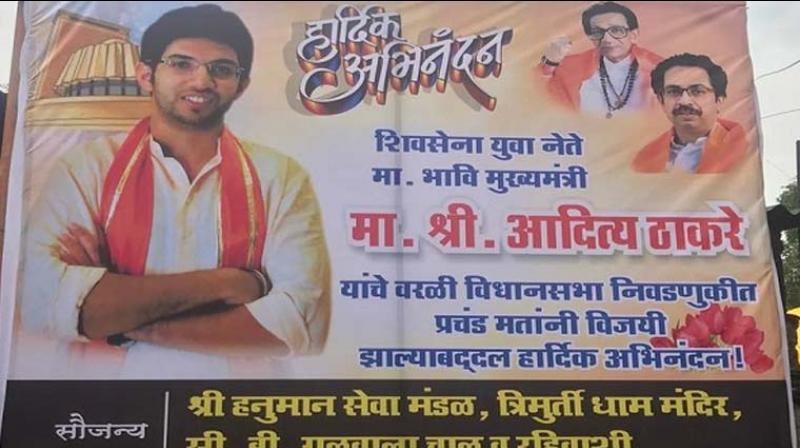 Mumbai: After the people's mandate on Thursday which has not given the majority to any political party in Maharashtra and provided room to political parties to negotiate, posters calling young Shiv Sena MLA Aaditya Thackeray the "future chief minister" surfaced in a part of Mumbai on Friday

This indicated that the Sena workers want the Thackeray scion to take the top job even though his father Uddhav Thackeray ruled it out, saying he is just a beginner, NDTV reported.

The posters of "Shiv Sena's young leader and would-be Chief Minister" have come up at Worli, from where Aaditya Thackeray won in the Maharashtra election. He defeated his rival, the Nationalist Congress Party (NCP)'s Suresh Mane by 67,000 votes.

Speculation swirled around 29-year-old Aaditya when his father while speaking to the media on the election outcome, spoke about the "50:50 formula", which means half the term for a chief minister from the BJP and the other half for the Sena.

"Before the Lok Sabha elections, Amitbhai (Amit Shah) had come to my house, and we had decided on a formula. Now the time has come to implement the same," said Uddhav Thackeray.

The BJP-Sena combine won around 160 seats in Maharashtra.

Aware of the fact that the BJP is dependent on it, the Sena rubbed it in with a sharp editorial and a cartoon.

In the editorial in its mouthpiece "Saamana", the Sena said the mandate has rejected the notion that elections can be swept by engineering defections and splitting opposition parties.

Aaditya Thackeray has been noncommittal about the speculation about a key post for him.