Sharad Pawar said: 'The one who is suspended from the party cannot give any orders.' 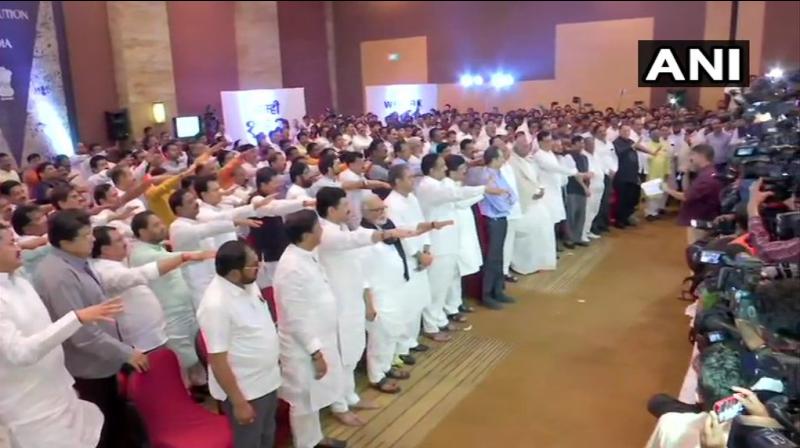 'I swear that under the leadership of Sharad Pawar, Uddhav Thackeray and Sonia Gandhi, I will be honest to my party,' Sena-NCP-Cong MLAs pledged. (Photo: ANI)

Mumbai: In a unique show of strength, 164 MLAs of the Shiv Sena, Congress and Nationalist Congress Party, took an oath of not falling prey to any inducements by BJP.

"I swear that under the leadership of Sharad Pawar, Uddhav Thackeray and Sonia Gandhi, I will be honest to my party. I won't get lured by anything. I will not do anything which will benefit BJP", Shiv Sena-NCP-Congress MLAs pledged.

On Monday, The luxury hotel in suburban Mumbai hosted the "parade" of Shiv Sena-NCP and Congress MLAs. The event came a day before the Supreme Court passed an order on the issue of floor test for the Maharashtra government led by Devendra Fadnavis whose swearing-in has been challenged by Shiv Sena-NCP-Congress combine.

At the grand assembly of MLAs Shiv Sena chief Uddhav Thackeray asked the BJP to "make way" for the Sena-NCP- Congress alliance to rule Maharashtra.

''Our fight is not just for power, our fight is for 'Satyamev Jayate.' The more you try to break us, the more we will unite,'' said Shiv Sena's Uddhav Thackeray.

NCP chief Sharad Pawar, who was also present, said BJP misused power to grab power even in states where voters hadn't given their mandate to it.

Pawar also said that his rebel nephew and sacked State legislature leader Ajit Pawar does not hold power to issue a whip.

''There will be no problem in proving our majority. The one who is suspended from the party cannot give any orders. On the day of the floor test, I will bring more than 162 MLAs. This is not Goa, this is Maharashtra''. Sharad Pawar said.

Locked in a protracted power tussle with the BJP in Maharashtra, the 'Maha Vikas Aghadi' of the Shiv Sena, NCP and Congress have decided to "parade" 162 MLAs in the Mumbai five- star hotel on Monday evening in a show of united strength.

The move was announced hours after the leaders of the three parties submitted a letter to Maharashtra Governor Bhagat Singh Koshyari claiming that they have the requisite numbers to form a government.

Congress leader Ashok Chavan, who was also present at the parade, said, "We are more than 162, not just 162. We all will be a part of the government. I thank Sonia Gandhi who allowed for this alliance to stop BJP... The governor should invite us to form the government," he said.

Senior Congress leader Mallikarjun Kharge were among those present during the show of strength aimed at making a public statement that the three parties hold the real mandate to govern the state.

The Sena and Congress MLAs arrived at the hotel shortly before 7 pm by various buses arranged by their parties. NCP MLAs were shifted there earlier from another hotel.

Even as the "parade" of MLAs was in progress in the hotel, supporters of these parties gathered outside shouted slogans against Prime Minister Narendra Modi and Home Minister Amit Shah.

Shiv Sena leader Sanjay Raut announced about the parade on his tweeter handle and appealed to state Governor Bhagat Singh Koshyari to witness the "parading" of the legislators of the three parties.

"We are all one and together, watch our 162 together for the first time at grand Hyatt at 7 pm, come and watch yourself @maha_governor. He tagged the official twitter handle @maha_governor of the Governor.

"The idea is to turn the public perception towards us. Once we parade 162 MLAs in one hall, entire nation will come to know that BJP is playing a dirty game in Maharashtra by misusing office of the governor," said an NCP leader to PTI.

The MLAs of the Sena, NCP and Congress are currently staying at different hotels in Mumbai.