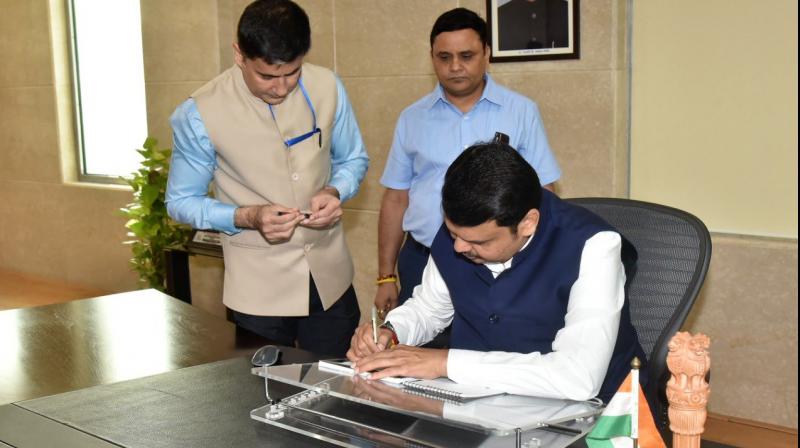 The first thing that the 49-year-old did was signing a cheque for the CM Relief Fund. (Photo: Twitter)

Mumbai: Even as political drama continues to flummox Maharashtra, Devendra Fadnavis on Monday reached Mantralaya, the state secretariat, and took charge of the chief minister's office.

Senior NCP leader and Deputy CM Ajit Pawar also assumed charge amid the ongoing protest by the Opposition over this 'illegitimate government'.

At the Vidhan Bhawan, CM Fadnavis and his deputy Pawar paid tribute to former Maharashtra Chief Minister Yashwantrao Balwantrao Chavan on his death anniversary, before taking the charge of the office.

CM Devendra Fadnavis’ first signature of this tenure was done on a #CMReliefFund cheque, on reaching Mantralaya, which was handed over to Kusum Vengurlekar by CM. pic.twitter.com/x43LtP6cbG

Fadnavis assumed office, hours after the Supreme Court gave a breather to the Fadnavis-Ajit government by reserving its order on a petition challenging the surprise government formation by the BJP for tomorrow.

In a dramatic turn of events, BJP leader Devendra Fadnavis, with the help of a faction of Nationalist Congress Party (NCP) MLAs led by Ajit Pawar stake claim to form government in Maharashtra and in an early morning ceremony, took oath as the chief minister.