NCP legislator Anil Patil says he was neither abducted not missing

On Sunday evening, all NCP MLAs were moved to hotel Hyatt in Mumbai, citing security concerns. 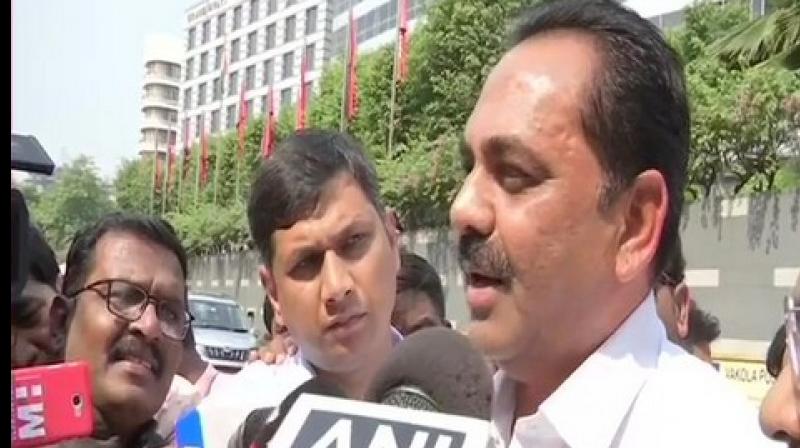 "We told Sharad Pawar Sahab that we want to return and stay with the party. He assured us that we will be brought back and made the necessary arrangements," he added. (Photo: ANI)

Mumbai: NCP legislator Anil Patil on Monday clarified that he was not missing or was abducted since the formation of government in the state last week.

"First of all, I request the media that I have not gone missing or was abducted. When we reached the hotel (in Delhi), at least 100-200 BJP workers were present there along with a lot of police cars and personnel in civil dress. We were scared," Patil told reporters here.

"We told Sharad Pawar Sahab that we want to return and stay with the party. He assured us that we will be brought back and made the necessary arrangements," he added.

Patel, along with Daulat Daroda, were lodged at a hotel in Gurgaon and came back to Mumbai along with Nationalist Youth Congress president Dheeraj Sharma and Nationalist Student Congress chief Sonia Doohan on late Sunday night, according to NCP leaders.

Another lawmaker Nitin Pawar had already reached Mumbai on Sunday while NCP MLA Narhari Zirwal is currently at a safe location in Delhi, party leaders said.

The MLAs who have returned have pledged their support to the Sharad Pawar-led NCP, which won 54 seats in the recently concluded assembly elections.

Meanwhile, following the recent development, NCP leader Nawab Malik told ANI that 52 MLAs have come back to Sharad Pawar-led party. "52 MLAs of the party have come back to us, one more is in touch with us," he said.

On Sunday evening, all NCP MLAs were moved to hotel Hyatt in Mumbai, citing security concerns.

In a surprise development, Devendra Fadnavis was sworn-in as the state's Chief Minister for the second time while NCP's Ajit Pawar took oath as his deputy on Saturday morning.

Following this, NCP has removed Ajit Pawar as the leader of its legislative party, with Sharad Pawar saying that the decision of his nephew to align with the BJP was against the party line and any MLA who aligns with him is likely to face anti-defection law.